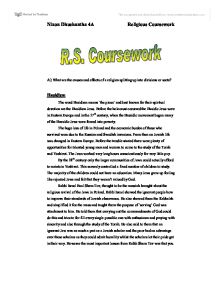 What are the causes and effects of a religion splitting up into divisions or sects?

Ai) What are the causes and effects of a religion splitting up into divisions or sects? Hasidism The word Hasidism means `the pious` and best known for their spiritual devotion are the Hasidism Jews. Before the holocaust occurred the Hasidic Jews were in Eastern Europe and in the 17th century, when the Hassidic movement began many of the Hassidic Jews were forced into poverty. The huge loss of life in Poland and the economic burden of those who survived were due to the Russian and Swedish invasions. From then on Jewish life was changed in Eastern Europe. Before the trouble started there were plenty of opportunities for talented young men and woman to come to the study of the Torah and Yeshivot. The Jews worked very long hours conscientiously for very little pay. By the 18th century only the larger communities of Jews could actually afford to maintain Yeshivot. This severely controlled a fixed number of children to study. The majority of the children could not have an education. Many Jews grew up feeling like rejected Jews and felt that they weren't valued by God. Rabbi Israel Baal Shem Tov, thought to be the messiah brought about the religious revival of the Jews in Poland. Rabbi Israel showed the ignorant people how to improve their standards of Jewish observance. He also showed them the Kabbalah and simplified it foe the mass and taught them the purpose of `serving` God was attachment to him. He told them that carrying out the commandments of God could do this and tries to for fill every single possible one with enthusiasm and praying with sincerity and also through the study of the Torah. He also said to them that an ignorant Jew was as much a part as a Jewish scholar and the poor had an advantage over these scholars as they could admit humility whilst the scholars let their pride get in their way. ...read more.

Women are also not allowed to pray as much as men and so don't attend as much as men. In Reform synagogues men and women are encouraged to attend as much as each other. Hasidic Jews believe, they all should live in a close community or return to the Holy Land. This can affect their lives in a big way. They would have to live close to a synagogue so they could walk there on a Saturday. The keeping of a kosher home is also very important. Hasidism Jews have to keep their houses kosher, as it is part of the Mitzvot. They would not be able to consume food, which was not kosher. Their cutlery would have to be different for different food products. Their kitchens would be laid out differently. The cupboards would be different for cutlery, meats and dairy products. In the Leviticus it says, these are the animals, which you may eat... anything, which has a completely slit hoof and chews the cud. This can affect Jews' lives in a big way. They could only eat at kosher restaurants. Reform leaders once abandoned the dietary laws, but now the laws are looked upon synagogue premises. They would have to go to a school, which serves school meals, which were kosher. Reform Jews believe that not all the 613 Mitzvot can't be kept. They think it's better to keep the important ones, e.g. traditionally it was taught that the 39 Melachot are forbidden on Shabbat. Members of the Reform communities don't consider it wrong to drive their cars or turn on lights on this day. For them "work" means literally going to there shop, factory, or working for a profit. They don't need to locate nearer synagogues, as they'd drive to a synagogue whilst the Hasidic will not. In Hasidism they will make sure that they bring their child up in a way that would please God and keep the Mitzvot. ...read more.

If a Reform Jew would change to an Orthodox Jew, his/her life would be seriously affected. They would have to change the clothes they wear, the food they eat, and attend synagogues regularly. They would also have to obey the 613 Mitzvot to the best of his/her ability. They would have to move house if they lived far away from a synagogue or would have to get a different job if it meant they had to work on Saturdays. This would be a huge change in their lives. They would have to learn to speak Yiddish, which would involve a lot of effort, which they previously would not have put in. The Orthodox would say, "They are the right beliefs and do not need to change". The main obstacle, they would have to "jump" is their belief about the Torah. The orthodox believe that God gave the Torah to Moses on Mount Sinai, whilst the non-Orthodox Jews believe that it is from man. As the Orthodox believe that the Torah is from God they believe that everything in it should be kept, respected and not changed in any way. If the religion has changed so much since it first started, then it would be impossible, to change every single person to the same divisions as people are more reluctant than that. All the divisions of Jews should NOT unite, as the different traditions and the cultures would be almost impossible to clarify and if they tried to its almost as if they were bound to fail. People should be allowed to follow their personal beliefs, though Orthodox Jews would not accept this. I can come to the conclusion that it would be good, for Jews to all unite into one big religion, but it would be difficult to accept the differences in all divisions. While the differences that seem so minor look small, the actual differences in the religion are important fundamental, differences in beliefs about the nature of the Torah. Nixon Dhushantha 4A Religious Coursework ...read more.