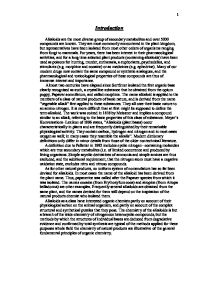 Alkaloids are the most diverse group of secondary metabolites and over 5000 compounds are known.

Introduction Alkaloids are the most diverse group of secondary metabolites and over 5000 compounds are known. They are most commonly encountered in the plant kingdom, but representatives have been isolated from most other orders of organisms ranging from fungi to mammals. For years, there has been interest in their pharmacological activities, and for a long time selected plant products (containing alkaloids) have been used as poisons for hunting, murder, euthanasia, a euphoriants, psychedelics, and stimulants (e.g. morphine and cocaine) or as medicines (e.g. ephedrine). Many of our modern drugs now contain the same compound or synthetic analogues, and the pharmacological and toxicological properties of these compounds are thus of immense interest and importance. Almost two centuries have elapsed since Serturner isolated the first organic base clearly recognised as such, a crystalline substance that he obtained from the opium poppy, Papaver somniferum, and called morphine. The name alkaloid is applied to the members of a class of natural products of basic nature, and is derived from the name "vegetable alkali" first applied to these substances. They all owe their basic nature to an amino nitrogen. It is more difficult than at first might be supposed to define the term alkaloid. The work was coined in 1818 by Meissner and implies a compound similar to an alkali, referring to the basic properties of this class of substance. Meyer's Konversations- Lexikon of 1896 states, "Alkaloids (plant bases) occur characteristically in plants and are frequently distinguished by their remarkable physiological activity. They contain carbon, hydrogen and nitrogen and in most cases oxygen as well; in many cases they resemble the alkalis". Modern dictionary definitions only differ in minor details from those of the older nontechnical literature. A definition due to Pelletier in 1982 includes cyclic nitrogen- containing molecules which are true secondary metabolites (i.e. of limited occurrence and produced by living organisms. Simple acyclic derivatives of ammonia and simple amines are thus excluded, and the additional requirement, that the nitrogen atom must have a negative oxidation state, excludes nitro and nitroso compounds. ...read more.

echinulin, ergonovine etc No class of naturally occurring organic substances shows such an enormous range of structures as the alkaloids with over 5000 known. It would be impossible to discuss each one of these within the time limit. Therefore, this project is concerned with the following alkaloids: Morphine ( including codeine and heroin), Cocaine, Nicotine and Caffeine (including theophylline). These alkaloids are present in enormous quantities in the world and seem appropriate to be discussed due to the current interest in their effects particularly when used illegally. They are some of the most well known alkaloids. Morphine (Codeine and Heroin) When the unripe seed capsules of the opium poppy, Papaver somniferum, is cut or pricked, a viscous liquid is exuded. After the exudates dries and darkens with exposure to air, a hard but still partly sticky mass is obtained. This is opium, which has been used for many centuries by some for medicinal purposes. Opium is important as a painkilling drug in its own right, but is also the source of other analgesic drugs such as morphine and heroin. Mankind had discovered the use of opium by the time of the earliest written records. In fact, the first recorded use of opium as a painkiller was around 6000 years ago by the Sumerians, and the Babylonian and Egyptian writings contain many references to the value of opium preparations for the relief of pain. Thomas Sydenham, the 17th Century pioneer of English medicine wrote, "Among the remedies which it has pleased Almighty God to give to man to relieve its sufferings, none is so universal and so efficacious as opium". Nowadays, although opium is no longer regareded as a universal analgesic, it is still a very important source of morphine. The pharmacologically active constituents of opium have been employed in medicine for many thousand of years. During the 19th century these constituents were isolated as pure chemical entities. ...read more.

Caffeine is an addictive drug. Among its many actions it operates using the same mechanisms that amphetamines, cocaine and heroin use to stimulate the brain. Caffeine's effects are milder but it is manipulating the same channels and that it is one of the things that give caffeine its addictive qualities. It is one of the most widely used drugs. More than 90% of the population Britain consume it everyday and its long-term effects are of current interest. Purines are usually synthesised by Traube's method in which a 4, 5 - diaminopyrimidine is treated with formic acid or, better, sodium dithioformate.4, 5- diaminopyrimidines are themselves obtained from 4- aminopyrimidines by nitrosation followed by reduction or via diazonium coupling of activated methylene compounds followed by cyclisation and reduction. Two examples are as follows: Uric acid (an 8-Hydroxypurine) are made using ethyl chloroformate in place of formic acid: Uric acid is then the starting material for other purines: Summary The term alkaloid refers to any Nitrogen containing compound extracted from plants, although the word is used loosely and some compounds of non-plant origin are also commonly known as alkaloids. The name is derived from their characteristic basic properties (alkali-like), which are induced by the lone-pair of electrons on nitrogen. The basic nature of the alkaloids, in conjunction with their particular three-dimensional architecture, gives rise to often-potent physiological activities, e.g. the narcotics morphine and heroin. The laboratory synthesis of an alkaloid can be a challenging problem. The goal nowadays is not only to synthesise the natural product, but also to do so from simple molecules by a short elegant pathway. Such syntheses have practical importance because many alkaloids are desirable drugs. Large amounts of these alkaloids are often difficult to obtain from natural sources. A simple synthesis can provide an alternative supply of such a drug. The 19th century was the heyday for structural studies on the alkaloids and the 20th century was notable for the large number of elegant syntheses that have been accomplished. Virtually all of the major alkaloids have now been synthesised. 1 1 ...read more.