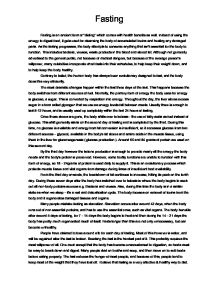 Fasting Fasting is an ancient form of "dieting" which comes with health benefits as well. Instead of using the energy to digest food, it gets used for cleansing the body of accumulated toxins and healing any damaged parts. As the fasting progresses, the body attempts to consume anything that isn't essential for the body to function. This includes bacteria, viruses, waste products in the blood and stored fat. Although not generally advertised to the general public, not because of medical dangers, but because of the average person's willpower, many celebrities incorporate short fasts into their schedules, to help keep their weight down, and to help keep the body healthy. Contrary to belief, the human body has always been evolutionary designed to fast, and the body does this very efficiently. ...read more.

During this time, no glucose is available and energy from fat conversion is insufficient, so it accesses glucose from two different sources - glycerol, available in the body's fat stores and amino acids in the muscle tissue, using them in the liver for gluconeogenesis ( glucose production ). Around 60 and 84 grams of protein are used on this second day. By the third day however the ketone production is enough to provide nearly all the energy the body needs and the body's protein is preserved. However, some bodily functions are unable to function with this form of energy, so 18 - 24grams of protein is used daily to supply it. This is an evolutionary process which protects muscle tissue and vital organs from damage during times of insufficient food availability. ...read more.

Fasts longer than this are not only unnecessary, but can become unhealthy. People have claimed to lose around a lb for each day of fasting. Most of this however is water, and will be regained after the fast is broken. Breaking the fast is the hardest part of it. This probably requires the most willpower of all. One must accept that the body has become unaccustomed to digestion, so foods must be easy to break down and digest. Many people start on broths and soup, and then move on to soft foods before eating properly. The fast reduces the hunger of most people, and because of this, people tend to keep most of the weight that they have lost off. I believe that fasting is a very effective & healthy way to diet. ...read more.