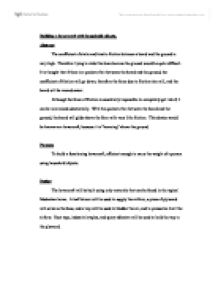 Building a hovercraft with household objects.

Building a hovercraft with household objects.

Although the force of friction is essentially impossible to completely get rid of, it can be minimized substantially.  With this pocket of air between the board and the ground, the board will glide above the floor with very little friction.  This device would be known as a hovercraft, because it is “hovering” above the ground.

To build a functioning hovercraft, efficient enough to carry the weight of a person using household objects.

The hovercraft will be built using only materials that can be found in the typical Muskokan home.  A leaf blower will be used to supply the airflow, a piece of plywood will serve as the base, and a tarp will be used to bladder the air, and to pressurize limit the airflow.  Duct tape, industrial staples, and spray adhesive will be used to hold the tarp to the plywood.

Duct tape the edges of the tarp that are folded over onto the plywood down so that they are airtight.  Then cover the entire top of the board with duct tape as to prevent air leaks.  Place the leaf blower on top of the pipe attachment.  Turn the leaf blower on, let the bladder (tarp) fill up, look, listen and feel for any air leaks, if there is any, patch them up with some duct tape.

After building the hovercraft, although the original model was a success and worked properly and as planned, there were a few problems that would arise.  The sliding of the craft on the ground, combined with the pressure the air put out, caused the bottom of the tarp to have scratches, holes and rips.  These holes and rips caused the air that was being held in by the bladder or tarp to escape.  The escape of the air reduced the pressure of the air coming out through the holes that were put in the bottom for the planned release of air, this lessened the applied force, and the hovercraft did not stay “up” properly.  These tares were easily patched up with duct tape.

Another problem that was encountered was the insufficient adhesiveness of the duct tape.  The duct tape was much strong enough to hold the tarp down