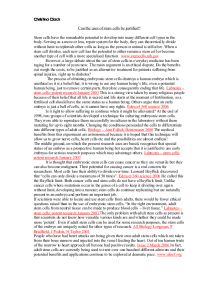 Can The Use Of Stem Cells Be Justified?

Can the uses of stem cells be justified? Stem cells have the remarkable potential to develop into many different cell types in the body. Serving as a more or less, repair system for the body, they can theoretically divide without limit to replenish other cells as long as the person or animal is still alive. When a stem cell divides, each new cell has the potential to either remain a stem cell or become another type of cell with a more specialised function. www.stemcells.nih.gov However, a large debate about the use of stem cells in everyday medicine has been raging for a number of years now. The main argument is an ethical dispute. Do the benefits out weigh the costs, to be justified as an alternative treatment for patients suffering from spinal injuries, right up to diabetes? The process of obtaining embryonic stem cells destroys a human embryo which is unethical as it is a belief that, it is wrong to use any human being's life, even a potential human being, just to remove certain parts, therefore consequently ending that life. ...read more.

Labnotes - stem cells: potent research January 2003 It is thought that embryonic stem cells can cause cancer as they are versatile but they can also become malignant. Their potential for causing cancer is a real concern for researchers. Most cells lose their ability to divide over time. Leonard Hayflick discovered that "cells can only divide a maximum of 50 times". Edexcel 360 science 2006 He called this the Hayflick limit. Both cancer cells and stem cells do not have a Hayflick limit. Unlike cancer cells where mutations occur in the genes of a cell to keep it dividing over again without limit, developing into a tumour; stem cells do continue replicating but are naturally present in an embryo and perform an important job. If scientists were able to locate and use stem cells from adults, there would be fewer ethical questions raised than in the use of embryonic stem cells. "In the right environment, adult stem cells from neutral tissue can be made to produce blood cells - liver tissue." Labnotes - stem cells: potent research January 2003 The only problem with adult stem cells as present is that scientists do not know how versatile various kinds are and whether they could be made more 'potent'. ...read more.