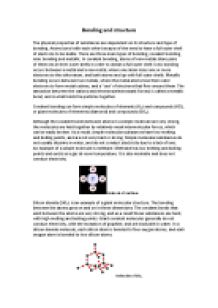 ﻿Bonding and structure The physical properties of substances are dependent on its structure and type of bonding. Atoms bond with each other because of the need to have a full outer shell of electrons to be stable. There are three main types of bonding; covalent bonding, ionic bonding and metallic. In covalent bonding, atoms of non-metals share pairs of electrons in their outer shells in order to obtain a full outer shell. Ionic bonding occurs between a metal and a non-metal, where one atom loses one or more electrons to the other atom, and both atoms end up with full outer shells. Metallic bonding occurs between two metals, where the metal atoms lose their outer electrons to form metal cations, and a ?sea? of electrons that flow around them. The attraction between the cations and electrons(electrostatic forces) is called a metallic bond, and is what holds the particles together. Covalent bonding can form simple molecules of elements (H2) ...read more.

When solid, giant ionic compounds do not conduct electricity as the ions are held in fixed positions and are unable to move. They only conduct electricity when molten or dissolved in water, and ions are free to move around. Ionic compounds are soluble in water. Sodium chloride is an example of a giant ionic lattice. Because of its high melting point, it is dissolved in water in order to conduct electricity. NaCL forms a 3D ionic lattice NaCl is ionised in water Atoms of iron form metallic bonds with each other. The valence electrons are free to move around from atom to atom, and atoms are said to be in a ?sea? of electrons. Because of this structure, metals conduct heat and electricity very well, are ductile and malleable. Iron is not a very good conductor of electricity, compared to other metals like copper. It is also not very ductile in its pure form. ...read more.

Each carbon atom in a molecule is bonded to only three other carbon atoms, leaving a fourth free or ?delocalised? electron. This is what enables graphite to conduct electricity. The interparticle forces between the carbon atoms are made from the covalent bonds and, since there is one less bond formed due to the free electrons, the forces between them are even stronger. The intermolecular forces in graphite are Van der Waal?s forces. This means that they are relatively weak. Graphite has a soft and slippery feel, and is used as lubricant, because the molecules slide over each other so easily. Due to the covalent bonds throughout the structure, graphite has a high melting point and boiling point, and like most other giant covalent structures, it is insoluble in water. Structure of graphite Aluminium is a metal in Group III which forms an ionic bond with oxygen to make aluminium oxide. However, aluminium oxide has some covalent characteristics. Aluminium oxide has a high melting and boiling point, and is insoluble in water. It is also an amorphous substance, meaning that it can react with both acids and bases. ...read more.