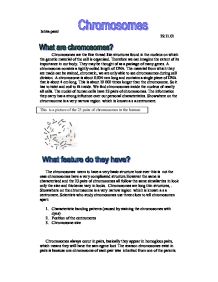 Ishita patel 29.11.01 Chromosomes are the fine thread like structures found in the nucleus on which the genetic material of the cell is organised. Therefore we can imagine the extent of its importance in our body. They may be thought of as a package of many genes. A chromosome consists a tightly coiled length of DNA. The material from which they are made can be stained, chromatin, we are only able to see chromosomes during cell division. A chromosome is about 0.004 mm long and contains a single piece of DNA that is about 4 cm long. This is about 10 000 times longer than the chromosome. So it has to twist and coil to fit inside. We find chromosomes inside the nucleus of nearly all cells. The nuclei of human cells have 23 pairs of chromosomes. The information they carry has a strong influence over our personal characteristics. ...read more.

The number of chromosomes is always set for each speciss. They will varies from other organiosm , however with the particular species remain the same i.e humans have 46 chromosomes , however onion cell have only 16chromosomes. Other important feature that chromosomes share is that they copy them selves. During intephase the chromosomes ar busily replicating them selvees. It creates two identical structures called chromatid s. They will remain attached until anaphase. Chromosomes are very important because they carry out important instructions and hold essential and vital information. We know that the DNA holds the important information that code for protein. The total length of the DNA of the human chromosome sis over 2 meters, shared between the 4 6 chromosomes . It is important to know that the half the number of chromosomes in an orgainsim came from each parent. ...read more.

These can have different effects on the organism. This help to show just how important chromosomes, as they do hold all the genetic information. 1. Point mutation: Mutation of a single nucleotide pair or a very small part of a gene. 2. Deletion: The chromosome breaks in two places and a segment is missing when the breaks heal. 3. Translocation: Two chromosomes break at different points. When the deleted gene from one chromosome attaches to the other chromosome, chromosomes with more or fewer copies of normal genes result. Those mutations can have different consequences: 1. Lethal: cause the organism's death 2. Conditional: produce a phenotypic effect under certain conditions 3. Loss of function: reduce the activity of a gene Gain of function: increase the activity of a gene So overall we can state that the chromosomes are the most important organisms that exist in our body and that are so important that change in one of the base pair, in the e DNA it can change/effect the whole organisim. ...read more.