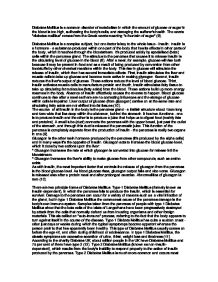 Diabetes Mellitus is a common disorder of metabolism in which the amount of glucose or sugar in the blood is too high, suffocating the body's cells, and damaging the sufferer's health. The words "diabetes mellitus" comes from the Greek words meaning "a fountain of sugar" (9). Diabetes Mellitus is a complex subject, but one factor is key to the whole issue - insulin. Insulin is a hormone - a substance produced within one part of the body that has its effects in other parts of the body, which it reaches through the bloodstream. It's produced solely by specialised (beta) cells within the pancreas gland. The stimulus to the pancreas that causes it to release insulin is the circulating level of glucose in the blood (8). After a meal, for example, glucose will rise both because it may be present in food and as a result of being produced by conversion from other foodstuffs by other chemical reactions within the body. This rise in glucose will stimulate the release of insulin, which then has several immediate effects. First, insulin stimulates the liver and muscle cells to take up glucose and become more active in making glycogen. Second, insulin reduces the liver's output of glucose. These actions reduce the level of blood glucose. Third, insulin activates muscle cells to manufacture protein and fourth, insulin stimulates fatty tissue to take up circulating fat molecules (fatty acids) from the blood. These actions build up more energy reserves in the body. Absence of insulin effectively causes the reverse to happen. ...read more.

There are several symptoms that are common to two main types of Diabetes Mellitus: * Thirst * Frequent passage of urine * Fatigue or non-specific ill health * Blurring of vission (due to changes in the lenses of the eyes) * Tendency to infections (particularly yeat infections like trush) These symptoms relate to the inefficiency or absence of action of insulin within the body. Insulin is essential for most cells to utilise glucose for energy and without it people easily become fatigued. They also start to burn up reserves of alternative energy such as fat and muscle tissue. Particularly in the type of Diabetes Mellitus that is common in younger people (type 1), this can lead to rapid weight loss. Despite the weight loss, appetite is often increased. This is contrast with the type of Diabetes Mellitus commoner in older people (type 2), which tends to come on more gradually and is usually associated with the person being overweight (3). You don't need to have all of these symptoms to be a diabetic and there are many conditions other than Diabetes Mellitus that can cause the same symptoms. The presence of any of them is good enough reason to see doctor and have a check up. Several of the symptoms result directly from the physical effects of raised blood glucose levels and are fue to "osmosis". Osmosis is the tendency for water to equalise its concentration when two solutions of different strenght are seperated by a "semi-permeable membrane". A semi-permeable membrane is a barier whose microscopic structure contains holes large enough to allow through molecules of water, but little or none of the material that's dissolved in water. ...read more.

is an essentialpart of reducing raised cholesterol and lowering the chance of getting heart disease. d) Eating five portions of fruit and vegetables daily. A good intake of fruit nad vegetables is proved to reduce blood pressure and protect against many other conditions including heart disease and probably some cancers as well as providing the essential vitamins and minerals. e) Cutting down salt intake. f) Alcohol. Consuming a small amount of alcohol daily ( up to two standart units) appear to have a beneficial effect upon cardiovascular risk. However, the effects rapidly turn from beneficial to harmful when higher levels of alcohol are consumed. In Diabetes Mellitus alcohol can lower the blood glucose level and therefore make it likely for a hypoglycaemic reaction to occur. There are many benefits to exercise for a diabetic person: a) Lower blood glucose levels duing and after exercise. b) Less insulin resistance. c) Lowering of "bad" cholesterol and elevation of "good" cholesterol. d) Lowering of blood pressure. e) Increased fat loss and muscle mass. f) Reduced stress and improved well-being. g) Improved circultion and reduced cardiovascular risk. Diet and exercise are the basic components of "lifestyle intervention" for Diabetes Mellitus (5). Higher than normal levels of glucose in the blood for more than very brief periods can affect many parts of the body adversely. Some of these problems may take years to develop and maintaining good control is vital. Fortunately, good treatment of Diabetes Mellitus markedly reduces the chance of serious complications developing. For treatment to be most effective it is important to detect Diabetes Mellitus in its early stages and to treat it right away.It is therefore very important that everyone is aware of the possible signs od Diabetes Mellitus and that they are acted upon early. ...read more.