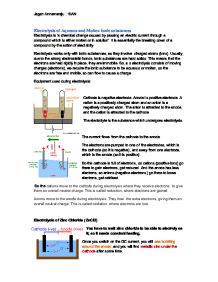 Electrolysis of Aqueous and Molten Ionic substances Electrolysis is 'a chemical change caused by passing an electric current through a compound which is either molten or in solution'. It is essentially the breaking down of a compound by the action of electricity. Electrolysis works only with ionic substances, as they involve charged atoms (ions). Usually, due to the strong electrostatic bonds, ionic substances are hard solids. This means that the electrons are held rigidly in place, they are immobile. So, as electrolysis consists of moving charges (electrons), we require the ionic substance to be aqueous or molten, so the electrons are free and mobile, so can flow to cause a charge. Equipment used during electrolysis: Cathode is negative electrode. Anode is positive electrode. A cation is a positively charged atom and an anion is a negatively charged atom. The anion is attracted to the anode, and the cation is attracted to the cathode. ...read more.

Once you switch on the DC current, you will see bubbling around the anode, and you will find metallic zinc under the cathode after some time. Explanation: Once the power source is connected, the electrodes will be charged and be the anode and cathode.The negative chlorine ion will be attracted to the anode, where it will loose the extra electron to the positive anode, i.e. get reduced. This results in neutral chlorine atoms. These join in a covalent bond with another atom to form chlorine molecules, and are released as a gas. The half equation: 2Cl-(l) --> Cl2(g) + 2e- The positive zinc ions are attracted to the cathode, where they gain the extra electrons (are oxidised), become neutral atoms and sink to the bottom, where they accumulate. The half equation: Zn2+(l) + 2e----> Zn(l) As electrons are used up in the cathode, there are spaces. ...read more.

This again increases global warming. Electrolysis is used in the chlor-alkali industry to gain other useful substances too, such as chlorine, that is used in bleaches and swimming pools, hydrogen, used for making ammonia and margarine and sodium, for making soap, paper, ceramics etc. Hydrogen as fuel in cars Hydrogen is extremely flammable, it has the most amount of energy per gram. It is also a very light gas. If it is directly used in an internal combustion engine, the gas would immediately seep out of the shafts, and when ignited, it will explode violently. So for any kind of use, it needs to be cooled to a liquid. This requires temperatures of -259.14oC, which is extremely hard and expensive to achieve even in a laboratory, and considerably harder to achieve in a medium sized car. Even if all this was possible, the possibility of hydrogen fuel stations are rare, so drivers would need to travel far for one. This is why it is used from water, an abundant material, in fuel cells, using electrolysis. ?? ?? ?? ?? Jagan Annamaraju 10AN ...read more.