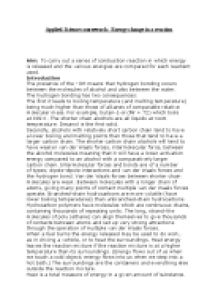 Experiment Hypothesis: The energy released by an alcohol increases as the number of carbon atoms increases.

﻿Applied Science coursework: Energy change in a reaction Aim: To carry out a series of combustion reaction in which energy is released and the various energies are compared for each reactant used. Introduction The presence of the ?OH means that hydrogen bonding occurs between the molecules of alcohol and also between the water. The hydrogen bonding has two consequences: The first it leads to boiling temperature (and melting temperature) being much higher than those of alkanes of comparable relative molecular mass. For example, butan-1-ol (Mr = 72) which boils at 309 K. The shorter chain alcohols are all liquids at room temperature. Decanol is the first solid. Secondly, alcohols with relatively short carbon chain tend to have a lower boiling and melting points than those that tend to have a larger carbon chain. The shorter carbon chain alcohols will tend to have weaker van der Waals forces, intermolecular force, between the alcohol molecules meaning that it will have a lower activation energy compared to an alcohol with a comparatively larger carbon chain. Intermolecular forces and bonds are of a number of types; dipole-dipole interactions and van der Waals forces and the hydrogen bond. ...read more.

-> CO2 (g) + H2O (g) This reaction is exothermic, as heat is given out. This is because the amount of reactant energy is more than the product energy the difference between this is energy is given off, therefore some energy has been given in the form of heat. The energy is given out in forming the bonds between the new water and carbon dioxide molecules. To measure the energy given off from the combustion, I must use this heat energy to heat something and this will water. This is assuming that all the heat produced by the combustion of the alcohol will be equal to the amount of heat absorbed by the water. So I will measure the amount of energy required to do so. There is no instrument which measures heat directly. So therefore I will have to arrange for the heat I wish to measure to be transferred into water and then I must measure the temperature rise. The heat is then given by the expression: Heat = Mass of water × Heat capacity of water × Temperature rise Heat = 1. ...read more.

Some errors were encountered in the experiment. This includes 1. The digital balance was not set accurately which resulted in errors in the data obtained from it. 2. The insulator used in covering the calorimeter was not changed which resulted in it absorbing heat during combustion but the was released back to the calorimeter, which resulted in temperature rise above expected value. 3. The spirit burner was not well insulated when burning so some of the heat escaped into the surrounding thus reducing the amount of heat absorbed by the water. 4. Parallax error involve in reading the thermometer. Despite the precautions that were taken during the experiment, some errors were also encountered in the experiment. Although the experiment in itself cannot be 100% accurate, but the result s that would be gotten can be improved by improving the methods used for carrying out the reaction. Such precautions includes: 1. Changing the insulator each time the experiment was carried out to reduce heat from warming up the calorimeter. 2. Cooling the calorimeter after every reaction. 3. Making sure the digital balance is set accurately to ensure accurate results. 4. Making sure the experiment was fully and well insulated with a good material that absorb heat readily. REFERENCE: A- LEVEL CHEMISTRY BY E.N RAMSDEN AND NEW SCHOOL CHEMISTRY BY ABABIO. ...read more.