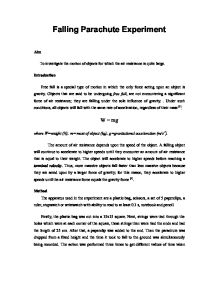 Falling Parachute Experiment Aim To investigate the motion of objects for which the air resistance is quite large. Introduction Free fall is a special type of motion in which the only force acting upon an object is gravity. Objects that are said to be undergoing free fall, are not encountering a significant force of air resistance; they are falling under the sole influence of gravity. . Under such conditions, all objects will fall with the same rate of acceleration, regardless of their mass [1]. W = mg where W=weight (N); m= mass of object (kg); g=gravitational acceleration (m/s2). The amount of air resistance depends upon the speed of the object. A falling object will continue to accelerate to higher speeds until they encounter an amount of air resistance that is equal to their weight. ...read more.

The height of 2 meter was chosen since the figures of time taken to fall were bigger so the changes were more significant and the action of measuring with the countdown clock was more accurate. The parachute was hold and dropped by the first group member and the clock was timed by the other member. During the experiment, the parachute sometimes surprisingly flew on the incorrect direction and got on the table. The other possibilities of errors might be the slow reaction of the clock holder, the non-zero error of the ruler due to the ledge at the bottom of the wall. There are several ways to reduce the errors. First is to do the experiment in a closed room in order to have no wind inside. Secondly, choose a wall that has no shelf at the bottom. Finally, use a light-gate instead of countdown clock. ...read more.

This answer is OK but far from perfect. It is customary to put a hypothesis or prediction from theory of what you expect to happen and then link back to it in the conclusion. The use of some phrase such ...

This answer is OK but far from perfect. It is customary to put a hypothesis or prediction from theory of what you expect to happen and then link back to it in the conclusion. The use of some phrase such as force of gravity are confusing and should be avoided, using weight helps to make it clear. The work is very well presented and clearly well organised.

There should be greater emphasis on the meaning of this result for example what the gradient of the line represents. It has been shown the weight of the object is inversely proportional to the time for it to fall but there is no mention of what this could mean - this is where it would be good to refer back to an earlier hypothesis or theoretical expectation. There is some qualitative explanation of errors but these aren't calculated numerically and don't show as error bars on the graph. This would make it easier to assess the reliability of the report and, hence, its significance.

The quality of writing is good. Clearly organised and visually very well presented this report was only really let down by its conclusions.