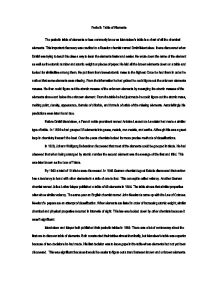 History of table of Elements

Periodic Table of Elements The periodic table of elements or less commonly know as Mendeleev's table is a chart of all the chemical elements. This important discovery was credited to a Russian chemist named Dmitri Mendeleev. It was discovered when Dmitri was trying to teach his class a way to learn the elements faster and easier. He wrote down the name of the element as well as the atomic number and atomic weight on pieces of paper. He laid all the known elements down on a table and looked for similarities among them. He put them from lowest atomic mass to the highest. Once he had them in order he noticed that some elements were missing. From the information he had gained he could figure out the unknown elements masses. He then could figure out the atomic masses of the unknown elements by averaging the atomic masses of the elements above and below the unknown element. From the table he had just made he could figure out the atomic mass, melting point, density, appearance, formula of chloride, and formula of oxide of the missing elements. ...read more.

The table shows that similar properties often show similar valency. The same year an English chemist named John Newlands came up with the Law of Octaves. Newland's papers are an attempt of classification. When elements are listed in order of increasing atomic weight, similar chemical and physical properties recurred in intervals of eight. This law was looked down by other chemists because it wasn't significant. Mendeleev and Meyer both published their periodic tables in 1869. There was a lot of controversy about the first one to discover table of elements. Both constructed their tables almost identically, but Meneleev's table was superior because of two decisions he had made. His first decision was to leave gaps in the table where elements had not yet been discovered. This was significant because it would be easier to figure out a trend between known and unknown elements. His second decision was to sometimes ignore the order of atomic weights and switch elements adjacent to each other. ...read more.

These are named according to were the last electron sits in the subshell. The f-block is usually at the bottom of the periodic table and names the rarest of all the earth metals. The d-block consists of groups 3 through 12 and contains all the transition metal. The p-block consists of groups 13 through 18 and contains all the semi metals. The s-block consists of alkaline earth metals and alkaline metals as well as helium and hydrogen. Together there are four blocks. With the now quantum mechanical theories of electrons inside the atom, it is known that each row is congruent to the filling shell of quantum electrons. The gaps left in the periodic table are now filled. Newly discovered elements will be given systematic names because of the debate of who gets to name it. Many elements have last names in them as well as colleges or universities were the element was discovered. For example, Einsteinium was named after Albert Einstein and Helium named after the Greek god Helios. Californium was named after the University of California. As of July 2009 there are 117 known elements. ...read more.

The candidate shows a good level of understanding and has clearly undergone independent research as they mention the dates in which certain events occur and go on to discuss quantum mechanics. This shows an interest in the subject and makes ...

The candidate shows a good level of understanding and has clearly undergone independent research as they mention the dates in which certain events occur and go on to discuss quantum mechanics. This shows an interest in the subject and makes the essay more interesting for the reader. However I feel the essay could be improved by inserting an image of the periodic table, in this case the use of imagery would be appropriate as it would allow the candidate to draw the readerâ€™s attention when discussing the way in which elements are grouped. Sometimes it is easier to describe something if you can refer to an image. On a positive note the candidate does go into sufficient detail throughout out the essay, this is shown clearly in their accurate description of the why in which elements are classified. In addition I feel that the conclusion could be improved upon, the additional information on how certain elements are named is interesting. However a conclusion should summarise your key points and ideas. A good conclusion is important as it brings the essay to a close and gives you a chance to leave the reader with a good impression.

The essay flows well, it is fluent and easy to follow. The candidate uses appropriate technical terms correctly and there is no issue with spelling or grammar. Overall this is a very good quality essay, it is informative, and the candidate clearly shows their knowledge of the subject. In addition the candidate has undergone independent research indicating their enthusiasm for this subject.