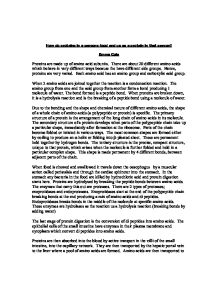 How do proteins in a persons food end up as a protein in that person?

How do proteins in a persons food end up as a protein in that person? Emma Cole Proteins are made up of amino acid subunits. There are about 20 different amino acids which behave in very different ways because the have different side groups. Hence, proteins are very varied. Each amino acid has an amino group and carboxylic acid group. When 2 amino acids are joined together the reaction is a condensation reaction. The amino group from one and the acid group from another form a bond producing 1 molecule of water. The bond formed is a peptide bond. When proteins are broken down, it is a hydrolysis reaction and is the breaking of a peptide bond using a molecule of water. Due to the bonding and the shape and chemical nature of different amino acids, the shape of a whole chain of amino acids (a polypeptide or protein) is specific. The primary structure of a protein is the arrangement of the long chain of amino acids in its molecule. The secondary structure of a protein develops when parts of the polypeptide chain take up a particular shape, immediately after formation at the ribosome. ...read more.

These enzymes are hydrolases as the reaction us a hydrolysis reaction (breaking bonds by adding water) The last stage of protein digestion is the conversion of di peptides into amino acids. The epithelial cells of the small intestine have enzymes in their plasma membrane and cytoplasm which convert di peptides into amino acids. Proteins are then absorbed into the blood by active transport in the villi of the small intestine, into the capillary network. They are then transported by the hepatic portal vein to the liver where a pool of amino acids are formed. Amino acids are then transported to working cells in the cytoplasm from which new proteins are made. Metabolically active tissues and rapidly growing organisms require a large supply of amino acids for protein synthesis. Protein synthesis relies on the effective communication of the coded information held in the genes to the sites of protein manufacture, the ribosomes in the cytoplasm. Since DNA is unable to move from the nucleus, messenger RNA molecules are needed. The mRNA is assembled using the enzyme RNA polymerase. This process is called transcription. ...read more.

Virtually all enzymes being proteins. The majority of the reactions that occur in living organisms are enzyme-controlled. Without them, the rate of the reactions would be so slow as to cause serious, if not fatal, damage. Without enzymes toxins would soon build up and the supply of respiratory substrate would decrease. Enzymes are proteins and thus have a specific shape. They are therefore specific in the reactions that they catalyse - one enzyme will react with molecules of one substrate. The site of the reaction occurs in an area on the surface of the protein called the active site. Since the active site for all molecules of one enzyme will be made up of the same arrangement of amino acids, it has a highly specific shape. Generally, there is only one active site on each enzyme molecule and only one type of substrate molecule will fit into it. Chymotrypsin and trypsin both catalyse the hydrolysis of peptide bonds but due to their shapes, the active site of chymotrypsin only splits bonds after an aromatic amino acid (one containing a ring of atoms) whereas trypsin only splits bonds after a basic or straight chain amino acid. ...read more.