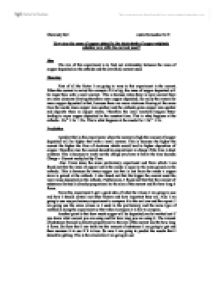 The aim of this experiment is to find out relationship between the mass of copper deposited on the cathode and the (variable) current used.

First of all the factor I am going to vary in this experiment is the current. When the current is varied for example if it is big, the mass of copper deposited will be larger than with a small current.  This is because when there is more current there are more electrons flowing therefore more copper deposited. So really the reason for more copper deposited is that, because there are more electrons flowing at the same time the anode loses copper ions quicker and the cathode gains copper ions quicker and deposits them as copper atoms. Therefore the ionic reactions happen faster leading to more copper deposited in the constant time. This is what happens at the cathode:- Cu2+ + 2e- = Cu. This is what happens at the anode Cu = Cu2+ + 2e-.

Also I have done the same preliminary experiment and from which I can found out that the mass of copper lost at the anode is equal to the mass gained on the cathode.

First of all I am going to set up the apparatus (which is on a separate sheet) then I am going to get the two electrodes and first of all polish them with emery paper so I get rid of any copper impurities of the surface and so I get fresh copper.

Also to extend my investigation even further I could for example use other salts such as copper chloride which should lead me to similar results. I could use any copper salt really because copper is the main part of the compound anyway. I would still get copper at cathode. I believe that this would have a different effect on the deposition of copper because copper chloride ions are different sizes and therefore would take longer or quicker to travel in the solution. This would also lead to changes in the resistance. Therefore the two solutions would have different resistances and I expect probably different conductivity depending of the concentration. Also if the solution was less resistant then I believe I would get more accurate results and bigger depositions because this would lead to more current passing through rather than part energy being changed into heat. If the solution had better conductivity then it would have to less resistance therefore less energy would be lost into heat which would warm the solution up and increase the activation energy and alter the resistance again leading to less accurate results because the current would change also.

Also what I could do is alter the concentration of the current which I already mentioned. This I believe would lead to greater depositions at the cathode because increasing the concentration would increase the number of ions in the solution therefore the conductivity of the solution would change. This means that more current will pass through than usually and so this should speed up the ionic reaction.