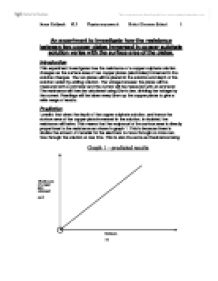 This experiment investigates how the resistance of a copper sulphate solution changes as the surface area of two copper plates (electrodes) immersed in the solution changes. The two plates will be placed in the solution and depth of the solution varied by adding solution. The voltage between the plates will be measured with a voltmeter and the current will be measured with an ammeter. The resistance will then be calculated using Ohm’s law, dividing the voltage by the current. Readings will be taken every 5mm up the copper plates to give a wide range of results.

The solutions were from the same batch

The temperature was kept as stable as possible by keeping the beaker out of sunlight so it could not heat up. It would have been better to keep them in a water bath to keep it temperature constant.

Different voltmeters and ammeters give slightly different measurements, so to reduce the chance of an anomalous result the same ones were used for each reading.

The copper sulphate solutions were taken from the same batch each time in the first experiment but in the second experiment, a different batch was used. This could have contained slightly different amounts of certain substances which might affect the resistance.

The same copper plates had to be used because each one has as slightly different surface area so the resistance would again be affected. The same ones were used for each experiment but they changed between experiments. It would have been better if the same ones could have been used and also if the copper sulphate solution was from the same batch for all readings.

Also, during electrolysis, material moves from the anode to the cathode so some copper from one of the plates would have been removed, lowering it’s surface area and been deposited on the other, raising its surface area. However, the amount moved in the short amount of time it took to do the experiment would have been negligible.

It would have been better to use a water bath to keep the temperature stable although it did stay constant during the experiment, it could have changed. Also, another improvement would be to get a piece of wood or other material to put between the copper plates to prevent them from moving and to keep them the same distance apart.

If the beaker which the experiment took place in was exactly the same size as the copper plates, it would have prevented extra current to flow between the plates.

If all these changes were implemented, the results would be more reliable as individual results and not just a trend. However, these factors were relatively insignificant in this experiment.

It would be good to take readings for other surface areas, both very small and also very large to see if the trends seen in this range continue and if the results are consistent through different ranges of results.