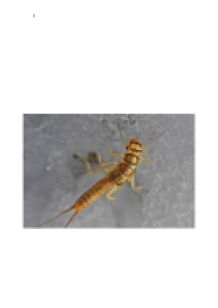 How Does The Oxygenation Level Of The Water Affect The Number Of Stonefly Larvae?

wild animals could cause an infection or disease Wear gloves when suitable and wash hands after handling animals Some plants or animals in and around the stream could be poisonous or give a nasty bite/sting Avoid plants and animals that you can not identify and stay away from the ones you do unless you know they are safe Revised plan I have arranged my preliminary results into scatter graphs to get a better view of how the different variables affect the dependant variable. Depth does not seem to have much of an affect on the number of stonefly at a site, there is no correlation in the scatter graph and the results are spread out so not very precise. This means I will need to control depth but not as carefully as other variables. Temperature does not seem to have much of an effect on the number of stonefly either, but I think this is because the temperature does not change much over the different sites I took samples from. This means I will need to control the temperature but not as much as other variables. Velocity of the water against number of stonefly larvae seems to have a positive correlation but not a very precise scatter. This means that velocity can affect the number of stonefly larvae at a site so I will need to control this variable as much as I can. I have decided to make many changes to my initial method of research. I have decided not to measure the depth or temperature of the water, as there is not a large enough range to affect my dependent variable. I will be controlling depth by only choosing places that are around the same depth but I will only measure this using my eyes. I have decided this because of the data I have gathered in my preliminary data. The temperature of the river I am taking my measurements in hardly changes and does not affect my dependent variable in my preliminary data. ...read more.

This means that stonefly are not directly affected by the speed of the water around them. Evaluation There where allot of variables I could not control because my research was carried out in a natural and unpredictable environment. The main limitations to my data was that I could not control the substrate of the site in the river where I took my sample, the rocks I tested on could have been slightly smaller or larger and there could have been a different amount each time. This could have caused random errors. Another limitation is that when you kicked the substrate 10 times to take a D-net sample you could not be sure to kick with the same strength each time, kicking harder would release more invertebrates from the stones, kicking weaker wouldn?t release as many. This also could have caused random errors. Overall variables where kept as constant as possible and the limitations to my data would not have affected my results too badly as they where small limitations (ignoring the occasional anomalous result). I repeated measurements often so this helped reduce the risk of random error significantly and the large number of samples I took gave enough replicates to support my conclusion. Therefore I believe my experiment was controlled well, the results reliable with a low degree of error and supports my conclusion well. I could improve my experiment by controlling the variables more precisely. I could do this by finding and marking multiple sites with as similar conditions as possible (depth, temperature, velocity) and then taking net samples at a later date. You would have to come back at a later date to take D-net samples as taking the measurements of the variables could disturb the invertebrates leading to unreliable results. You would need to conduct the research over a larger stretch of river to get enough data and mark the sites you would use in a way that would not have an affect on invertebrates in the area. This was not possible during my research, as I did not have the time. ...read more.