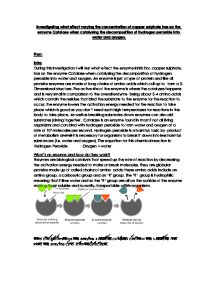 Investigating what effect varying the concentration of copper sulphate has on the enzyme Catalase when catalysing the decomposition of hydrogen peroxide into water and oxygen.

Investigating what effect varying the concentration of copper sulphate has on the enzyme Catalase when catalysing the decomposition of hydrogen peroxide into water and oxygen. Plan: Intro During this investigation I will test what effect the enzyme inhibitor, copper sulphate, has on the enzyme Catalase when catalysing the decomposition of hydrogen peroxide into water and oxygen. An enzyme is just a type of protein and like all proteins enzymes are made of long chains of amino acids which coil up to form a 3-Dimensional structure. The active site of the enzyme is where the catalyses happens and is very small in comparison to the overall enzyme being about 3-4 amino acids which contain the residue that bind the substrate to the enzyme for the reaction to occur, the enzyme lowers the activation energy needed for the reaction to take place which is good as you don't need such high temperatures for reactions in the body to take place. As well as breaking substrates down enzymes can also aid substrates joining together. Catalase is an enzyme found in most if not all living organisms and can bind with hydrogen peroxide to form water and oxygen at a rate of 107 molecules per second. Hydrogen peroxide is a harmful, toxic by-product of metabolism and so it is necessary for organisms to break it down into less harmful substances (i.e. water and oxygen). The equation for this chemical reaction is: Hydrogen Peroxide Oxygen + water What's an enzyme and how do they work? Enzymes are biological catalysts that speed up the rate of reaction by decreasing the activation energy needed to make or break molecules. They are globular proteins made up of coiled chains of amino acids; these amino acids include an amino group, a carboxylic group and an 'R' group. The 'R' group is hydrophilic meaning that it likes water and so the 'R' group are all on the outside of the enzyme making them soluble and so easily transportable within organisms. ...read more.

and the PH of the whole experiment. The only variable that changes is the concentration of the copper (ii) sulphate. Risk assessment * Goggles must be worn at all times during the experiment as harmful substances such as copper (ii) sulphate may irritate eyes. * Copper (ii) sulphate is harmful when swallowed due to fumes and dust irritates the lungs and airways. To avoid swallowing any fumes or solution keep the copper (ii) sulphate away from the face and keep it contained. It is also harmful to the skin so take great care when using the copper (ii) sulphate. Wear eye protection and clothes that cover any part of the body that may come in contact with it. * Hydrogen peroxide can cause burns and is corrosive in high concentrations so wearing protective clothing is a necessity. When dilute it can still cause irritation to the eyes and skin. If it does get into the eye then flood the eye with water for 10 minutes and seek medical attention. If it gets on the skin and clothing then soak the clothing and flood the skin with tap water. If blistering occurs then seek medical attention. * Take care when handling sharp or pointy objects such as the cork borer as they could penetrate the skin if not used in a suitable manor. To avoid any cuts or wound from such objects hold the object with the point facing down when moving around with it and take care when cutting the potato or other fruit or vegetables. * When handling containers, beakers or other glass containers, be careful as not to drop them due to them shattering or spilling harmful substances such as the hydrogen peroxide or copper (ii) sulphate. If such spillages occur then inform a teacher. Analysing results After obtaining my results and recording them all in tables I will work out all the averages and then plot these averages on a graph. ...read more.

minutes ranged from 5.3cm3 in the first set of tests to 2.5cm3 in the third set of tests which is less than half of the first result I got. This shows a big inaccuracy within the repeat experiments I did. Overall I believe my results were reliable to the extent that they supported the idea that as the concentration of the inhibitor increases the amount of the substrate produced decreases. Al though the results supported my hypothesis I don't think they were very reliable as for each concentration the difference in values was quite large. This would be overcome by putting in place the improvements I've suggested and even repeating the experiments for each concentration may improve the reliability of the results however realistically having three repeats should be enough to provide reasonably accurate and reliable results. The main source of error that would have the biggest impact would be the gas being leftover in the delivery tube as quite a lot of gas can be held in there before it escapes. Although there are many anomalous results I believe that my conclusions are valid as the results do show a trend up until the results that I believe to be anomalous. I can also say that my results are valid because other groups in the class got similar results in the way that their repeat results weren't very close either, so we can say that it is more than likely that it was the method we used as we all used, as we all used the same method, that caused the results to be so different for each repeat. The errors that occurred do affect the accuracy of my results and could be improved upon with better equipment and a more accurate method for example using the syringe to measure the amount of potato to use each time alongside using a gas syringe instead of an upside down burette would eliminate the huge difference in values for repeat results. ?? ?? ?? ?? ...read more.