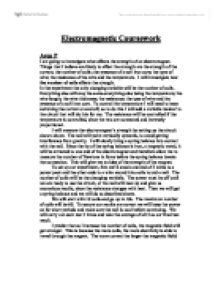 I am going to investigate what affects the strength of an electromagnet.

In the experiment the only changing variable will be the number of coils.  Everything else will stay the same-everything else being the temperature; the wire length; the wire thickness; the resistance; the type of wire and the presence of a soft iron core.  To control the temperature I will need to keep switching the current on and off, so to do this I will add a variable resistor to the circuit that will do this for me.  The resistance will be controlled if the temperature is controlled, since the two are connected and inversely proportional.

I will measure the electromagnet’s strength by setting up the circuit shown above.  The nail will point vertically upwards, to avoid getting interference from gravity.  I will slowly bring a spring balance into contact with the nail.  Since the

Our results look as they do since the wires give off magnetic fields.  The larger these fields, the more force in the attraction between the spring balance and the electromagnet.  To make the field larger, more coils are added to the wire.

We can easily see that the more coils, the greater the strength.  When the amount of coils is increased, a larger magnetic field is produced, increasing the strength.  The graph backs this up, showing clearly an increase in strength with more coils.  The line on the graph does not show direct proportionality between the two variables, but the proportionality is not far off.  I feel maybe if the 30 coils recording had been slightly lower, our line of best fit would have shown proportionality.

The gradients of the various points on the curve also tell us something else.  We can see a large difference in the early coils, where, for example, the gradient between 10 and 20 coils is 1.5.  In the later stages of the graph, the gradient is smaller.

I feel our results were fairly reliable, in that there were no abnormal results and all our results fitted a general pattern.  The only result that was slightly out of sync was the 30 coils recording.  This may have been because the power pack had overheated a bit, affecting the magnetic field of the wire, or simply because we had to take an average, which may change recordings a bit from what they would be if they were totally accurate.

If I had more time I would probably do the experiment in more detail and look at more tests, instead of taking the average of 3.  I would stretch it over a longer time period so the wire couldn’t overheat and there was less of the human error factor.  I would probably use a machine to avoid this human error, and look at more coils, for example, 2,3,4,5 coils, or 3,6,9,12,15 coils.

I could also investigate thicker wires, and different sized coils.  I could see how current and iron cores affect the magnetic fields and then look at other materials of wire, for example, nickel, platinum, and other magnetic metals.  I would use other methods of recording the field strength instead of a spring balance-maybe use paper clips instead.  From there I could try using a lighter material instead of paper clips, for example steel shavings. I could also see how heat affects the magnetic field.