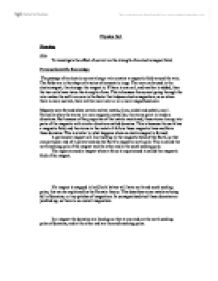 To investigate the effect of current on the strength of an electromagnet field.

To investigate the effect of current on the strength of an electromagnet field.

The passage of an electric current along a wire creates a magnetic field around the wire. The fields are in the shape of a series of concentric rings. The more coils used in the electromagnet, the stronger the magnet is. If there is one coil, and another is added, then the two coils have twice the strength of one. This is because the current going through the wire makes the soft-iron core is the factor that induces electromagnetism, as so when there is more current, there will be more wire or or a more magnetised core.

Magnets were formed when certain molten metals, (iron, nickel and cobalt,) cool . Normally when the atoms in a non magnetic crystallise, the atoms point in random directions. But because of the properties of the metals mentioned, these atoms line up into parts of the magnetic with similar directions called domains. This is because the earth has a magnetic field, and the atoms in the metal all follow these magnetic lines and form these domains. This is similar to what happens when an electromagnet is formed.

A permanent magnet will line itself up in the magnetic field of the Earth, so that one particular end of it points towards the Earth’s magnetic north pole. This is called the north-seeking pole of the magnet and the other end is the south seeking pole.

I decided to do current, as the others were more difficult to do. I believe that when I do the experiment, proportionally as the current increases, the strength will increase.

2) Crocodile clips will be connected to yellow connecting wires at each end.

3) These together with the ammeter will be connected up to the power supply as shown in the circuit diagram.

I think that the  experiment was done successfully as all the repeats were similar, and we did not have any anomalous points, as shown on the graph. These could have been the result of human error in noting the readings of current or the weight of the cup, however this is unlikely as two sets of repeats were carried out

The reliability of the results could have been improved by;

To ensure that the point of saturation is reached I would like to repeat the investigation perhaps with more coils around the electromagnet. This would increase the current and in turn strengthen the electromagnet’s field pattern, resulting in more domains being lined up and saturation occurring earlier.

I would also investigate using different ferromagnetic materials acting as the core, I know that the softer the metal is the easier it is for the domains to be lined up. The electrons of each atom in a metal produce a resultant magnetic field because they are moving charges and moving charges form electric currents. These resultant magnetic fields would vary depending on the type of metal and so it is important I experiment with different metals acting as a core. Saturation could also be achieved earlier by increasing the strength of the electromagnet.