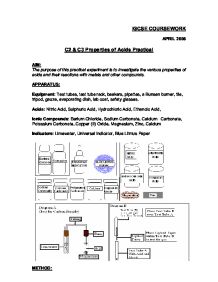 The effects of adding the drops of barium chloride were then noted to see if the mixture went cloudy and results entered into the results table. This was again repeated for the remaining three acids. 5. The four acids were again selected, poured into test tubes and carefully labelled as before. To each of the 4 acids in the test tubes, a spatula of copper (II) oxide was added in turn to each of the four acids. Each mixture was then gently warmed in turn with the Bunsen burner and this test was true the results were then observed and noted in the results table. 6. Finally, each of the acids were selected, and tested in turn, first with universal indicator solution, then second blue litmus paper. The effects in each case were noted as before. Variables: Quantitative amounts of each of the four acids, metals and compounds i.e. Sodium Carbonate, Calcium Carbonate, Potassium Carbonate, Magnesium, Calcium, Zinc, Barium Chloride, Copper (II) Oxide, Universal Indicator and Blue Litmus Paper. In addition, the various results were noted. ...read more.

In part two of the experiment, only Ethanoic acid and nitric acid did not produce hydrogen gas when the two acids were put with zinc. In part three of the experiment, Barium Chloride only reacted with Sulphuric acid. Copper (II) oxide, reacted with all four of the acids causing them to turn blue. Finally, In part four of the experiment, all acids, when mixed with universal indicator turned red and all acids with blue litmus paper turned pink. A potential source of error would be that when you were testing for the gas, it might have already escaped, which would give you incorrect results. It is extremely important that all labels are clear to ensure the chemicals don't get mixed up and so that you don't have inaccurate results. CONCLUSION: For each set of the five compounds, generally similar reactions and results were produced when each of the different acids were mixed with each of the five compounds. In consequence, as discussed, most reactions with carbonates produced carbon dioxide except Ethanoic acid, the reactions with metal usually produced hydrogen and a mixture of acids and copper (II) oxide turned blue when heated. However, when barium chloride was added to the acids only sulphuric acid turned a milky white colour. ...read more.