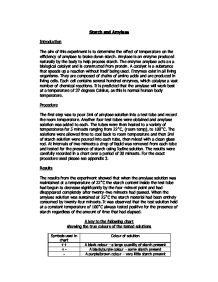 Starch and Amylase Introduction The aim of this experiment is to determine the effect of temperature on the efficiency of amylase to brake down starch. Amylase is an enzyme produced naturally by the body to help process starch. The enzyme amylase acts as a biological catalyst and is constructed from protein. A catalyst is a substance that speeds up a reaction without itself being used. Enzymes exist in all living organisms. They are composed of chains of amino acids and are produced in living cells. Each cell contains several hundred enzymes, which catalyse a vast number of chemical reactions. It is predicted that the amylase will work best at a temperature of 37 degrees Celsius, as this is normal human body temperature. Procedure The first step was to pour 5ml of amylase solution into a test tube and record the room temperature. Another four test tubes were obtained and amylase solution was added to each. The tubes were then heated to a variety of temperatures for 5 minuets ranging from 22�C, (room temp), to 100�C. The solutions were allowed time to cool back to room temperature and then 5ml of starch solution were poured into each tube, then mixed with a clean glass rod. ...read more.

- - - - - ++ 30mins - - - - - - - - ++ The results featured in Table 1. have also been presented in graph format on the following page. Conclusion During the year 1835 Anselme Payen and Jean Persoz first discovered the chemical substance known as amylase while conducting a malt purification experiment. Although they could not explain the exact role of amylase they theorised that it was essential for certain biochemical processes. There are two major types of amylase which both function to catalyse the hydrolysis of starch, glycogen or dextrin. Hydrolysis occurs when a molecule is split up by the addition of another polar water molecule. Alpha amylase found in normal human saliva is termed ptyalin and is responsible for the first stages of chemical digestion. Ptyalin initiates the brake down of polysaccharides, such as starch, found in food as they enter the mouth. Starch is a polymer, a chain of amino acids that are linked together by glycosidic bonds and salivary amylase interrupts the bonding process to form many double units. The double glucose units are referred to as maltose, a substance that is utilised by the body in the formation of energy. ...read more.

The test solution maintained at 100�C was shown to have contained the highest amount of starch, and therefore lowest amylase activity. The enzyme did not appear to function effectively at temperatures above 40�C, and seemed to work best at lower temperatures, around 22�C. The collision theory also states that as temperatures increase, so does particle vibration. As temperatures rise the bonds holding the enzyme together may shake apart, and change the shape of the molecule. If the shape of the enzyme alters significantly the substrates can no longer bind with the active site, and the molecule ceases to function. This part of the theory may best explain the results from the experiment. As the temperature increased above 22�C, the increased vibrations may have shaken the amylase structure and altered the active site shape, so slowing the rate of reactions. By the temperature 100�C, every amylase molecule had altered so much that they had all denatured. In conclusion, the experiment demonstrated that when amylase was exposed to temperatures above 40�C the rate of reaction reduced drastically. Although chemically, a temperature rise increases the number of particle collisions, it also increases the likelihood of the brake down of the three dimensional structure of the enzyme molecule. It was not possible to obtain the exact optimum temperature for amylase function from the experiment, however it is assumed to be around 37�C, normal human body temperature. ...read more.