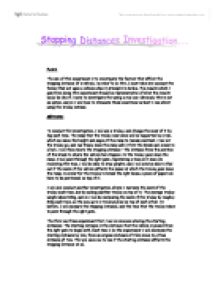 The aim of this experiment is to investigate the factors that affect the stopping distance of a vehicle. In order to do this, I must take into account the forces that act upon a vehicle when it attempts to brake. The results which I gain from doing this experiment should be representative of what the results would be like if I were to investigate this using a real car. Obviously this is not an option, and so I will have to stimulate these conditions as best I can whilst using the trolley instead.

To conduct this investigation, I will use a trolley, and change the mass of it by 1kg each time. The ramp that the trolley runs down will be supported by a tub, which will allow the height and angle of the ramp to remain constant. I will let the trolley go, and run freely down the ramp until it hits the break and comes to a halt. I will then record the stopping distance – the distance from the position of the break to where the vehicle has stopped. As the trolley goes down the ramp, it will pass through the light gate, registering a time as it does. Be recording this time, I will be able to draw graphs, and I will also be able to find out if the mass of the vehicle affects the speed at which the trolley goes down the ramp.

There are certain ways in which I can ensure that this is a fair test. For example, the height and angle of the ramp will be kept constant throughout, and the metre rules will always be in the same position. The brake will always be placed in the same place, and I will always measure starting and stopping distances from the same point on the trolley.

For this investigation, I predict that as the mass of the vehicle increases, so will the stopping distances of it. This is because the trolley will become heavier, and so stronger forces will be needed to bring it to a halt. The equation for kinetic energy is:

According to this equation, and previous experiments, if you double the mass of a vehicle, its kinetic energy should, technically, double as well. That is why that I predict that as the mass increases, so will the stopping distances. My final prediction is that the longest stopping distances will occur when there are 3 trolleys altogether, and when 4 extra 1kg weight have been added to the trolley.

I could improve on the accuracy of this investigation in a few ways. For example, I could extend the range of measurements that I made, maybe going down from 40cm instead of just 14cm. Also, more accurate measuring equipment could have been used, so that the times and stopping distances were as close as they could be to being 100% accurate. All of these things would give me a wider and more accurate range of results.