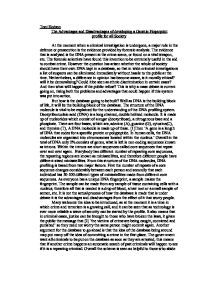 The Advantages and Disadvantages of developing a Genetic Fingerprint profile for all Society.

Toni Hodson The Advantages and Disadvantages of developing a Genetic Fingerprint profile for all Society At the moment when a criminal investigation is undergone, a major role in the defence or prosecution is the evidence provided by forensic analysis. The evidence that is analysed is the DNA present at the crime scene, or found on a vital weapon, etc. The forensic scientists have found this invention to be extremely useful in the aid to combat crime. However the question has arisen whether the whole of society should have their own DNA kept in a database, so that in wide criminal investigations a list of suspects can be eliminated immediately without hassle to the public at the time. Nethertheless, a difference in opinion has become aware, is it morally ethical? will it be demoralising? Could it be seen as ethnic discrimination in certain cases? And then what will happen if the public refuse? This is why a mass debate is current going on, rising both the problems and advantages that could happen if this system was put into action. ...read more.

It is not the actual process of how the database is made that is under debate it is the advantages and disadvantages from the effect of it that worry people. Many welcome the idea to be introduced, as at the moment it is a time in which crime and terrorism is a growing call, and it can be seen that as technology is ever more reliable a wave of security can be started by the profile. It also means that in criminal cases, justice can be brought to those who have broken the laws, it gives the public the message that [2] 'the victims of crime are being caught, convicted and punished' so they need not worry the same person might commit again. Another argument for the database to go ahead is that the idea of the database being around may put many off the idea of committing a crime in the first place. The government want all criminals to be put on the database as soon as they are arrested; this means that if another crime happens an automatic search of past criminals will happen to see if it is a repeating criminal. ...read more.

better there own life, and they should only be worried if they are considering committing crimes themselves in which case is justified itself. The aim is to ensure the safety of the general public, and as we have the technology we should use it to better the world. There is such a high amount of crimes being committed at the moment and so something does need to be done before the problem becomes too much that it the criminal system is over run, as it is close at the moment. The air wave at the moment of combating crime needs to be achieved and this is a good step for the future. To conclude if one major crime committing person is taken off the streets through the database, it would be worth the effort. The initiative means proving people guilty for the crimes they have committed and therefore they can face the justice. I believe the database should be put into place to contain all the criminals and maybe in the future contain everybody, as long as it lowers the rate of crime. ...read more.