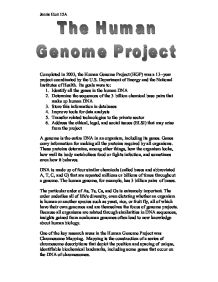 The benefits and criticisms of the human genome project

Completed in 2003, the Human Genome Project (HGP) was a 13-year project coordinated by the U.S. Department of Energy and the National Institutes of Health. Its goals were to: 1. Identify all the genes in the human DNA 2. Determine the sequences of the 3 billion chemical base pairs that make up human DNA 3. Store this information in databases 4. Improve tools for data analysis 5. Transfer related technologies to the private sector 6. Address the ethical, legal, and social issues (ELSI) that may arise from the project A genome is the entire DNA in an organism, including its genes. Genes carry information for making all the proteins required by all organisms. These proteins determine, among other things, how the organism looks, how well its body metabolises food or fights infection, and sometimes even how it behaves. DNA is made up of four similar chemicals (called bases and abbreviated A, T, C, and G) that are repeated millions or billions of times throughout a genome. The human genome, for example, has 3 billion pairs of bases. The particular order of As, Ts, Cs, and Gs is extremely important. ...read more.

can be studied through germline mutations in lineages * Migration of different population groups can be studied based on maternal genetic inheritance * Mutations on the Y chromosome can be studied to trace lineage and migration of males * Breakpoints compared in the evolution of mutations with ages of populations and historical events * Potential suspects identified whose DNA may match evidence left at crime scenes * Persons wrongly accused of crimes can be exonerated * Crime, catastrophe, and other victims identified * Paternity and other family relationships established * Endangered and protected species identified as an aid to wildlife officials (could be used for prosecuting poachers) * Bacteria and other organisms detected that may pollute air, water, soil, and food * Organ donors matched with recipients in transplant programs * Pedigree determined for seed or livestock breeds * Authenticate consumables such as caviar and wine * Disease-, insect-, and drought-resistant crops grown * Healthier, more productive, disease-resistant farm animals bread * More nutritious produce grown * Biopesticides developed * Edible vaccines incorporated into food products * New environmental cleanup uses developed for plants like tobacco These are a large ...read more.

foods and microbes * Commercialisation of products including property rights (patents, copyrights, and trade secrets) and accessibility of data and materials * Cost and availability of life insurance There are several issues that raise a lot of concern, and things are not always so clear-cut. Where do we draw the line between aborting a foetus because of it's genetic predisposition to breast cancer and aborting it because it's face is not symmetrical or it's eyes are brown? Others say that the benefits of this information out way any drawbacks and that when put in perspective are only minor concerns that do not have much significance. After looking at the benefits and criticisms of the human genome project I can see that the research has been extremely beneficial to medicine and science in general. It has led to some major changes in treatment of diseases, understanding DNA and the production of food produce. However, there are many controversial issues surrounding the research and it's outcomes. It will have a massive affect on our lives in the future, but weather this will be (overall) good or bad is yet to be seen. Jennie Hunt 12A ...read more.