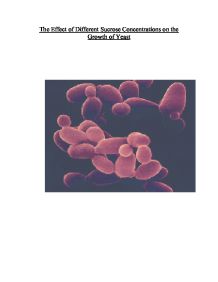 The effect of different sucrose concentrations on the growth of yeast.

The Effect of Different Sucrose Concentrations on the Growth of Yeast I will be looking at yeast and seeing if it is effected by different concentrations of sucrose. Yeast is a single celled organism called fungi. It is a very useful and has been used by humans for thousands of years. It is used to ferment drinks such as fruit juices into alcoholic drinks and make bread rise. The anaerobic respiration yeast carries out is often called fermentation because it results in the production of alcohol. Baker's yeast, not the same as winemaker's or brewer's yeast, can be bought fresh or dried. Fresh yeast can be stored for 2-3 weeks in a plastic container in the refrigerator or for several months in the freezer. Dried yeast granules can be kept several months. When the gas is made in the dough, it gets trapped and so tiny bubbles form inside the dough. This makes the bread rise. 'Knocking back' gets rid of large bubbles, which can develop. When the dough is baked the bubbles expand. The yeast dies in the baking process and ethanol is evaporated. For making wine the yeast and fruit juices are put inside a sterile jar called a demijohn. As the yeast respires anaerobically it does not need a supply of oxygen. As it respires ethanol is made as well as carbon dioxide gas. ...read more.

However, I did get some strange results. On the 5th and 4th time, the number either stayed the same or increase but did not decrease which is what I would of predicted to happen and fits my average. However, on the 1st, 2nd and 3rd time there was some decrease before it continued to increase. The first decreased between 4% and 6%, the 2nd decreased from 4% to 8% and the 3rd decreased from 6% to 8%. To eliminate this I would need to repeat those three and see if they still decrease half way through. There are a few limitations to this experiment. One was when we counted the yeast cells you couldn't tell which were alive and which were dead. To improve my experiment I would only could the live yeast cells. If I were to do this experiment again I would do the same except count them over a period of time to see how much they grow by. Also only count the live ones because that would give me a better overview. I would also leave them for longer until they reached the decline phase and see how long they took to reach it. In other experiments I could use another sugar instead of sucrose and see what the feed better on and use bacteria instead of yeast. ...read more.