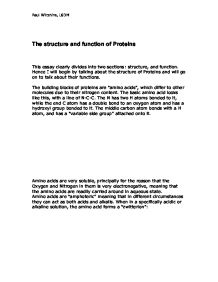 The structure and function of Proteins

The structure and function of Proteins This essay clearly divides into two sections: structure, and function. Hence I will begin by talking about the structure of Proteins and will go on to talk about their functions. The building blocks of proteins are "amino acids", which differ to other molecules due to their nitrogen content. The basic amino acid looks like this, with a line of N-C-C. The N has two H atoms bonded to it, while the end C atom has a double bond to an oxygen atom and has a hydroxyl group bonded to it. The middle carbon atom bonds with a H atom, and has a "variable side group" attached onto it. Amino acids are very soluble, principally for the reason that the Oxygen and Nitrogen in them is very electronegative, meaning that the amino acids are readily carried around in aqueous state. Amino acids are "amphoteric" meaning that in different circumstances they can act as both acids and alkalis. When in a specifically acidic or alkaline solution, the amino acid forms a "zwitterion": When added to an acid, the zwitterion form of the amino acid acts as a buffer by taking up H+ ions to keep the concentration oh hydrogen constant, and hence to raise the pH. ...read more.

Quaternary structure involves the interaction of several polypeptide chains to form one functional protein. E.g. haemoglobin. As discussed, there are many different types of protein, and all of these play different roles in the body. In this section, I will attempt to talk about these roles. The first major role of proteins is that of enzymes. Enzymes are structurally made of globular proteins. They act as biological catalysts made by living cells, and they control metabolism and cell reactions. Enzymes never start reactions, but simply speed them up, by acting as biological catalysts, in reducing the activation energy for a reaction: Shown above, most reactions require some kind of energy input to start off a reaction, as reactions don't just occur out of the blue. Also, at the end of a reaction, enzymes remain unchanged or unaltered- hence they can be used again. The formula for what goes on in an enzyme reactions is: Enzyme + Substrate --> Enzyme-Substrate complex --> Enzyme + Product There are two main theories about how enzymes react with molecules. The first is the Lock and Key Theory. It states that all enzymes' active sites are shaped specifically to fit certain molecules. If a molecule of that type is nearby, it will fit into the active site of the enzyme, and will be broken down. ...read more.

A clear example of this is the roles played by two hormones; insulin and glucagon. When the blood sugar levels rise above natural levels, the pancreas secretes insulin. This hormone breaks down sugary glucose into glycogen, thus lowering the blood sugar level. If however the blood sugar levels get too low, the pancreas secretes glucagon which converts glycogen into sugary glucose, thus raising the blood sugar levels. The action of these two hormones, secreted by the pancreas, helps regulate and control the blood sugar levels in the body. Receptor proteins are built into the membranes of nerve cells in the nervous system of the body. They detect chemical signals released by other nerve cells, and are also involved in the cell's response to chemical stimuli. If these proteins where not present, the stimuli would stimulate the cell, but it would not be passed along nerves to the response centre, and no response would be made. Contractile proteins are vital in movement of animals. Actin and Myosin, for example, are responsible for movement of muscles, creating body movement overall. Other contractile proteins control undulations of cilia and flagella, which propel many cells. Finally, defensive proteins are vital in the body, as they fight off disease; like antibodies, which combat bacteria and viruses. Such proteins are called immunoglobulins. ?? ?? ?? ?? Paul Wiltshire, L6DM ...read more.

** An essay that covers some of the basics of protein structure and function. It introduces a number of points but seldom explores them at sufficient depth or with sufficient detail. Some of the factual material is erroneously described.
To improve:
Scientific content.
Unfortunately a lot of the material presented is of a basic level with only some content at a higher level indicating greater depth or breadth of study. The essay shows understanding of the basic biological principles involved but there are worrying errors in some sections and the use of key terminology needs to improve.
The writer would probably have improved the mark awarded if the structure and function sections were linked together which would have allowed, for example, the description of the alpha helix to be linked to the strength of fibrous proteins such as keratin and collagen and the description of tertiary structure to the need for a particular three dimensional shape in the active site of a protein. When describing the roles of proteins it is always better to relate this to their structure where possible.
Breadth
A number of aspects were covered in this essay but there were few references to anything other than very obvious examples from human biology. It would be useful to quote examples from the other Kingdoms where possible to illustrate a point eg. use haemocyanin , blue copper-containing respiratory pigment (a metalloprotein) found in most molluscs and some arthropods, instead of hemoglobin. Light sensitive proteins are found in plants and are responsible for photoperiodic responses. Cobra venom is a toxic protein which kills by blocking nerve function.
Relevance
The writer has kept to the topic throughout but perhaps the time spent focusing on properties of amino acids would have been better spent discussing the structure of proteins in more depth and detail.
Quality of written communication
The account is fairly logical and generally presented in clear scientific English but the writer needs to ensure that the correct terminology is used throughout e.g amino acid residues not amino acids are the components in a protein, nitrogen atoms are found in proteins and not nitrogen.