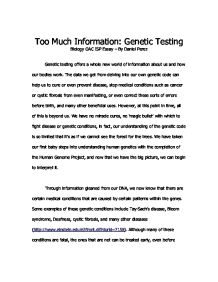 Too Much Information: Genetic Testing

Too Much Information: Genetic Testing Biology OAC ISP Essay - By Daniel Perez Genetic testing offers a whole new world of information about us and how our bodies work. The data we get from delving into our own genetic code can help us to cure or even prevent disease, stop medical conditions such as cancer or cystic fibrosis from even manifesting, or even correct these sorts of errors before birth, and many other beneficial uses. However, at this point in time, all of this is beyond us. We have no miracle cures, no 'magic bullet' with which to fight disease or genetic conditions, in fact, our understanding of the genetic code is so limited that it's as if we cannot see the forest for the trees. We have taken our first baby steps into understanding human genetics with the completion of the Human Genome Project, and now that we have the big picture, we can begin to interpret it. Through information gleaned from our DNA, we now know that there are certain medical conditions that are caused by certain patterns within the genes. ...read more.

Having this information about your future is also something some people may not want to have, because of the obvious discomfort of knowing that something bad will happen to you, but not knowing when or where. Aside from the personal aspects of facing such a fate, there are also other implications from being diagnosed with a medical condition through genetic testing. Although some gene patterns actually indicate a condition, some merely show a tendency or an increased chance for that person to get the disease, but nothing definite. Some insurance companies have already denied coverage or even cancelled the policies of people who have had genetic tests done and found that they were predisposed to some condition. Obviously, this is not the purpose that the tests were developed, and if the person had not had this test performed, they would still have insurance, thus raising ethical questions about who can access this data, and how to prevent insurance companies from using this type of medical data, should they obtain it, to deny coverage from people who are healthy but may develop something in the future. ...read more.

On the other hand, if parents are permitted to abort and kill the babies because of genetic imperfection, this opens a door to a whole new world of problems. Parents who chose this option would be participating in positive eugenics, the active removal of 'inferior' genes from the gene pool, i.e. aborting children with genetic problems. If the idea of aborting 'defective' children were to spread to other parts of the world, like those where a child who is born with a vagina instead of a penis is considered to be 'defective', what then? Who would decide the limits of when a child should and should not be aborted? These are all questions that will be answered in time, as the ethics of these situations slowly catch up with the science. All in all, the world of genetic testing is still new, the uses and misuses are still wide open to discussion and the technology continues to advance almost daily. The ethical, moral and legal dilemmas created by these techniques are sure to be a debated subject for some time to come, and as to whether or not people should be genetically tested pre-emptively, that is for them to decide. ...read more.

This is a well-executed essay. It is focused throughout on the comparisons between the poems and how Agard challenges values and ways of thinking. The focus on language is sustained and points are developed.
The style in which the essay is written is also very good, with few lapses in clarity of expression.
Comments about structure and specific literary techniques should only be made when specific links can be made, avoid feature spotting for the sake of it. In this essay the student is mostly successful in making points about structure.