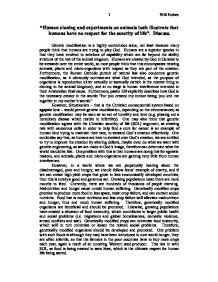 What moral issues are raised by the genetic modification, plants and micro-organisms

"Human cloning and experiments on animals both illustrate that humans have no respect for the sanctity of life". Discuss. Genetic modification is a highly contentious issue, not least because many people think that humans are trying to play God. Humans are a superior species in that they have evolved to echelons of capability which are far beyond the ability stratums of the rest of the animal kingdom. Humans are created by God in Genesis to be stewards over the entire world, so most people think that this encompasses treating animals, plants and micro-organisms with respect as they are part of the creation. Furthermore, the Roman Catholic pursuit of natural law also condemns genetic modification, as it obviously contravenes what God intended, as the purpose of organisms is reproduction either sexually or asexually (which is the nearest thing to cloning in the animal kingdom), and at no stage is human interference intended in their Aristotelian final cause. Furthermore, psalm 139 explicitly describes how God is the necessary creator in the womb: "For you created my inmost being; you knit me together in my mother's womb." However, Situationism - that is the Christian consequential system based on agapaic love - would permit genetic modification, depending on the circumstances, as genetic modification may be seen as an act of humility and love (e.g. ...read more.

Genetically modified crops can minimize food insecurity, which will in turn minimize or lessen the related social problems. Therefore, genetically modified organisms should be developed and promoted. One problem with such foods is although they may have been introduced to cure world hunger, they are often infertile, so that the farmers in the poor countries have to buy more crops each year, again a result of an uncaring Western seed-producer. This ties in with SOL, as food is being created to save lives, which is the ultimate respect for human life being sacred. Nevertheless, if the natural world is not ours to modify and to modify organisms is to exert unprecedented power, then such acts reveal an objectionable level of arrogance, which is non-virtuous. Engaging in a non-virtuous action is ill advised and wrong and genetic modification is therefore ill advised and wrong too. Natural Law is essentially sceptical about the benefits of genetic modification. Nevertheless, genetic modification is a progression of what we have been doing for years. For example, in Genesis, there is the story of Jacob who selectively breeds. Indeed pedigree animals and even domesticated animals, and cross breeds are genetically modified versions of what is ultimately natural. ...read more.

This disrespects the SOL, as it may lead to hundreds of people starving, if, say, super-locusts wiping out crops in poorer countries. To conclude though, it may just be that society as a whole has time to contemplate which uses of the technology might be acceptable and which would not. Views will inevitably change over time: the first test tube baby, Louise Brown, was born in 1978, beforehand it was seen as appalling and in vitro fertilisation is now commonplace too. Attitudes will also vary between countries: many fear that cloning would be exploited by megalomaniacs but in my view, it is far more likely that the ethical boundaries will be tested by the in vitro fertilisation clinics in the USA. Overall, though, I think that in certain circumstances, genetic modification can and does respect the SOL. Indeed, therapeutic cloning to create stem cells would mean that lives could be saved, and grave terminal illnesses could be greatly reduced, because of life being seen as sacred. However, it is in the application of genetic modification that it may not respect the SOL, especially if it occurs without agape, but instead for financial gain, as SOL immediately becomes a facade for a doctor/scientist to perform such an act whilst claiming to be morally good and morally right. 1 Will Forbes ...read more.