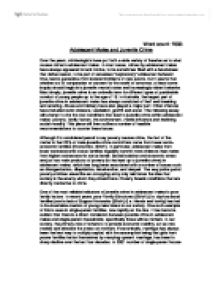 Word count: 1603 Adolescent Males and Juvenile Crime Over the years, criminologists have put forth a wide variety of theories as to what causes crime in adolescent males. In most cases, crimes by adolescent males have always appeared to lack motive, to be sometimes filled with a hatefulness that defies reason, to be part of senseless "exploratory" adolescent behavior. One cannot generalize from isolated incidents of rare events, but it seems that whether out of compassion or concern for the world of tomorrow, at least some inquiry should begin into juvenile mental states and increasingly violent behavior. Most simply, juvenile crime is an umbrella term for different types of punishable conduct of young people up to the age of 18. In Australia, the largest part of juvenile crime in adolescent males has always consisted of theft and breaking and entering. Abuse and robbery have also played a major part. Other offences have included r****t violence, vandalism, graffiti and arson. The following essay will attempt to cite the root conditions that lead to juvenile crime within adolescent males: poverty, family factors, the environment, media influence and declining social morality. This piece will then outline a number of feasible recommendations to counter these issues. Although it is considered pass� to say poverty causes crime, the fact of the matter is that 22% of male juvenile crime committers come from lower socio-economic families (Economics, SVoH). ...read more.

Hypothetically, a high-school bully challenges trouble young man to "meet him in the parking lot after school." Under circumstances like these, the peer pressure and reward systems are so arranged that fighting seems the only way out. Popular explanations of juvenile crime often rest on ideas of the insidious Cultural (SVoH) impact of the media and a decline in Social Justice (i.e. Social morality). The fact is that TV is much more pervasive, and has become the de facto babysitter in many homes, with little or no parental monitoring. Where there is strong parental supervision in other areas, including the teaching of moral values and norms, the effect of prolonged exposure to violence on TV is probably quite minimal. When TV becomes the sole source of moral norms and values, this causes problems. Australia's children watch an astonishing 19,000 hours of TV by the time they finish high school, much more time than all their classroom hours put together since grade one. By eighteen, they will have seen 200,000 acts of violence, including 50,000 murders. Every hour of prime time television carries 8-10 acts of violence. Most surveys show that around 80% of Australian parents think there is too much violence on television. Since the early 1990s, a number of films, music videos, and rap music lyrics have come out depicting and glamorising gang life, drugs, s*x, and violence. ...read more.

Parents who are determined to be aiding and abetting curfew violators are subject to fines and community service. The implementation (Ottawa Charter - Enable) would inevitably see parents watching their teens during curfew hours when the majority of crimes are committed, and also see them broadening and Developing their Personal Skills (parental). This would also provide households with more of an incentive to reform and repair the poor Support Networks and Family Structures that too often have led to the problem of juvenile crime in adolescent males in the first place, and hence Create and healthy and loving Supportive Environment. Public Health Solutions: Juvenile Correctional Centers According to the Australian Bureau of statistics, the total number of juveniles in custody for Australia is about 8,000. Most of these youth are held in only semi-secure facilities designed to look more like prisons than correctional centers. If the government were to Reorient Public Health Services in redesigning Juvenile Correctional Centers to look more like Youth Groups. In this sense, adolescent males will be given more of an incentive to participate in Correctional Programmes and Develop Personal Skills. In a Supportive Environment, adolescent males will be able to thrive and develop valuable Support Networks and Social Relationships with males with similar backgrounds. One cannot generalize from isolated incidents of rare events, but it seems that whether out of compassion or concern for the world of tomorrow, at least some inquiry should begin into juvenile mental states and increasingly violent behavior. ...read more.