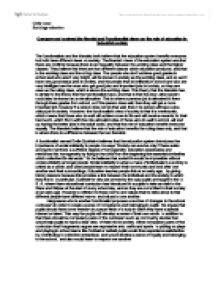 Compare and contrast the Marxist and Functionalist views on the role of education in industrial society The functionalists and the Marxists both believe that the education system benefits everyone, but both have different views on society. The Marxist views of the education system are that there are conflicts because there is an inequality between the working class and the higher classes. They believe that there are two different classes which education produces, and that is the working class and the ruling class. The people who don't achieve good grades in school and who aren't very bright, will be known in society as the working class, and so won't have very good status jobs in society, and the people that do brilliantly in school and who are very intelligent are the ones who get good jobs and important jobs in society, so they are seen as the ruling class, which is above the working class. This theory that the Marxists has, is similar to the theory that the functionalists have, and that is that the education system could also be known as a role allocation. This is where a persons job is allocated to them through there grades from school, so if the person does well, then they will get a more important job, however if a person does not do that well, then the person will have a low status job in society. ...read more.

school, which will also teach them to respect rules in general, he says 'It is by respecting the school rules that the child learns to respect rules in general, that he develops the habit of self-control and restraints simply because he should control and restrain himself. It is a first initiation into the austerity of duty. Serious life has now begun.' Parsons, another functionalist, saw the education system as an important mechanism for the selection of individuals for their future role in society. In his words it 'functions to allocate these human resources within the role-structure of adult society'. So by testing the students and evaluating their results, the schools will be able to match their talents, skills and capacities to the jobs that they would be best suited to. So the school is therefore seen as the major mechanism for role allocation. Davis and Moore who are also functionalists also have a similar theory to Parsons, but they linked the education system more directly with the system of social stratification. They see social stratification as a mechanism for maintaining that the most talented and able members of society are allocated to those positions that are functionally most important for society. ...read more.

Those who are denied success blame themselves, and not the system, which has condemned them to failure. Although, Bowles and Gintis have been criticised for ignoring the influence of the formal education. David Reynolds claims that the curriculum doesn't seem designed to teach either the skills needed by employers, or uncritical passive behaviour, which makes workers easy to exploit. Another Marxism point of view, Henry Giroux argues that the working class pupils are actively involved in shaping their own education. They do not accept everything they are taught, nor is their behaviour entirely determined by capitalism. Pupils draw upon their own cultures in finding ways to responding to schooling, and often these responses involve resistance to the school. He also argues that the education system possesses relative autonomy from the economic infrastructure. Although in some respects Giroux's work is subtler than that of Gintis and Bowles, Andy Hargreaves believes that it fails to solve the problems associated with Marxist theories of education. To Hargreaves there is a massive contradiction built into the theory of resistance and relative autonomy: it claims that education is free to develop in its own way and is influenced by numerous social groups, yet it is still determined by the economy. So both Marxism and the functionalists have different views on society, and how education affects society, but both have structural perspectives. Cathy Jones Sociology-education ...read more.