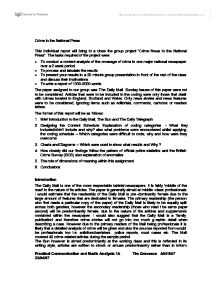 Crime in the National Press

Crime in the National Press This individual report will bring to a close the group project "Crime News in the National Press". The tasks required of the project were: * To conduct a content analysis of the coverage of crime in one major national newspaper over a 2 week period. * To process and tabulate the results * To present your results in a 20 minute group presentation in front of the rest of the class and discuss their implications. * To write a report of 1500-2000 words The paper assigned to our group was The Daily Mail. Sunday issues of this paper were not to be considered. Articles that were to be included in the coding were only those that dealt with crimes located in England, Scotland and Wales. Only news stories and news features were to be considered, ignoring items such as editorials, comments, cartoons or readers letters. The format of this report will be as follows: 1. Brief introduction to the Daily Mail, The Sun and The Daily Telegraph 2. Designing the Content Schedule: Explanation of coding categories - What they included/didn't include and why? also what problems were encountered whilst applying the coding schedule - Which categories were difficult to code, why and how were they overcome 3. ...read more.

Also as was detailed earlier, all drug offences now fell into one category whereas before they had fallen across 'Summary Offences' and 'Other Indictable Offences' It was not whether an article gave details of the victims/offender and also what details were given. These were recorded using the following headings: * Gender (male/female) * Age (0-10, 11-30, 31-50, 51+) * Occupation (Full-time employment, unemployed) * Race (White, Asian, Black) * What light (viewpoint) are the victims/offenders shown in (positive light, neutral, negative) When collecting information regarding victims/offenders details it was important that no assumptions were made, thus a victim/offender could not be categorised as a certain race say, unless it was stated that they were of that ethnic group. It was more often the case that the ethnicity of the subject was mentioned but in some cases the ethnic origins of a victim/offender was unclear. The occupation could and should have been further categorised to allow for whether the victim/offender was in professional employment (i.e. teacher or solicitor), general employment (labourer, cleaner) or unemployed. This would have shown whether the Mail was focusing on a certain type of victim/offender a lot better than our analysis does. ...read more.

The Telegraph however makes very little use of photographs mainly due to the large number of stories printed per page- it would be impractical to include photographs with every article. Conclusions As expected none of the papers reported an accurate representation of crime within society. Had the sample been taken at a different time I think it would have given different results, indeed without the war in some case the first 16 pages of the paper would have been available for more mundane stories. Also a bigger sample should have been used to give a broader scope to the results, perhaps coding 6 months of issues then results would be inline with the Official Police Statistics which are updated every 6 months. Newspapers are businesses and need to sell issues to make a profit, they are not bound by morals to provide an accurate representation of society, if items on events other than crime are more likely to sell papers then that Is what they will feature. Sources: Researching communications (Deacon et al, 1999) British Crime Survey 1997 Notifiable Offences recorded by the police 2000 (Home Office) Appendices: 1. Pie Chart to show Notifiable Offences Recorded by the Police for 2000 2. Pie Chart to Show Coverage of Crime in the Daily Mail ?? ?? ?? ?? Practical Communication and Media Analysis 1A Tim Greveson A041857 23/04/07 ...read more.