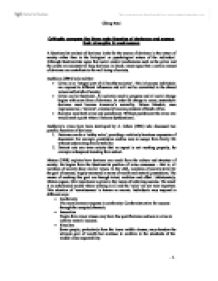 Critically compare the three main theories of deviance and assess their strengths & weaknesses A functionalist analysis of deviance looks for the source of deviance in the nature of society rather than in the biological or psychological nature of the individual. Although functionalists agree that social control mechanisms such as the police and the courts are necessary to keep deviance in check, many argue that a certain amount of deviance can contribute to the well-being of society. Durkhiem (1895) believed that: * Crime is an 'integral part of all healthy societies'. This is because individuals are exposed to different influences and will not be committed to the shared values and beliefs of society. * Crime can be functional. All societies need to progress and all social change begins with some form of deviance. In order for change to occur, yesterday's deviance must become tomorrow's normality. Nelson Mandela, once imprisoned as a 'terrorist', eventually became president of South Africa. * Societies need both crime and punishment. Without punishment the crime rate would reach a point where it became dysfunctional. Durkheim's views have been developed by A. ...read more.

5. Now a deviant subculture may develop which includes norms and values which support their deviant behaviour. Becker's approach is used by Jock Young (1971) in his study of 'hippie' marijuana users in London. 1. The police see hippies as dirty, lazy drug addicts. 2. Police action against marijuana users unites them and makes them feel different. 3. As a result they retreat into small groups. 4. Deviant norms and values develop in these closed groups. Hair is grown longer, clothes become more unconventional and drug use becomes a central activity. Thus a self-fulfilling prophecy is created. Lemert (1972) distinguishes between 'primary' and 'secondary' deviance. Primary deviance consists of deviant acts before they are publicly labelled. Trying to find the causes of primary deviance is not very helpful because: * Samples of deviants are inevitably based only on those who have been labelled, and they are therefore unrepresentative. * Most deviant acts are so common that they may be, in statistical terms, normal. Most males may at some time commit a homosexual act, engage in delinquency and so on. The important factor in creating 'deviance' is the reaction of society - the public identification of the deviant. ...read more.

Feminists have argued that Marxist theories ignore the importance of patriarchy in influencing the criminal justice system. Marxists have also been accused of neglecting the importance of racism in the enforcement of law. 2. Crime has not been eradicated in communist societies based on Marxist principles. 3. Stephen Jones (1998) points out that capitalism does not always produce high crime rates. For example, in Switzerland the crime rate is very low. 4. Perhaps the distribution of power is not as simple as some Marxists suggest. Jones gives the example of insider trading (taking advantage of 'insider' knowledge to make huge profits on the stock exchange). This is illegal, which suggests that capitalists do not always get the laws they want. 5. 'Left Realists' believe that Marxists put too much emphasis on corporate crime. Other crimes such as burglary cause greater harm than Marxists imply. Their victims are usually working-class and the consequences can be devastating for them. 6. Post-modern Criminology rejects Marxist criminology as being neither believable nor defensible. Despite these criticisms, Marxism has been an influence on a number of critical perspectives on deviance. Some have drawn their inspiration from Marxism and can be referred to as neo-Marxist approaches. Others owe less to Marxism and are better defined as radical approaches. Chirag Patel - 1 - ...read more.