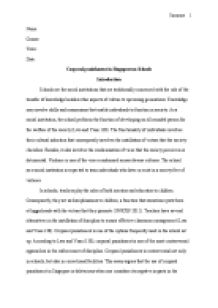 ﻿Surname Name: Course: Tutor: Date: Corporal punishment in Singaporean Schools Introduction Schools are the social institutions that are traditionally concerned with the role of the transfer of knowledge besides other aspects of culture to upcoming generations. Knowledge may involve skills and mannerisms that enable individuals to function in society. As a social institution, the school performs the function of developing an all rounded person for the welfare of the society (Lwo and Yuan 138). The functionality of individuals involves their cultural induction that consequently involves the instillation of virtues that the society cherishes. Besides, it also involves the condemnation of vices that the society perceives as detrimental. Violence is one of the vices condemned across diverse cultures. The school as a social institution is expected to train individuals who later co-exist in a society free of violence. In schools, teachers play the roles of both mentors and educators to children. Consequently, they act as disciplinarians to children, a function that sometimes puts them at loggerheads with the virtues that they promote (UNICEF 2012). Teachers have several alternatives in the instillation of discipline to ensure effective classroom management (Lwo and Yuan 138). Corporal punishment is one of the options frequently used in the school set up. ...read more.

This perception of the negative intention towards the learner creates emotional instability that distracts the learner from effective learning. Terminologies such as unpleasantness, shame and disgrace make an effective learning environment, and are all associated with corporal punishment. Some scholars describe corporal punishment as an assault that involves an attack on a child?s self and that such a child cannot defend him/herself from it. Consequently there is an argument that such children cannot regain their dignity in the face of corporal punishment (University of Toronto 2011). The result is that this creates resentment towards educators as children refrain from open communication with educators. Education involves the passage of knowledge between teachers and learners. Research shows that the success of the exercise is pegged to the existence of an open environment that facilitates free communication between teachers and students in the absence of fear. According to Lwo and Yuan (140), corporal punishment impairs the relationships between children and caretakers and consequently reduces communication between the parties. This lack of communication creates an ineffective learning environment. From an ethical perspective, corporal punishment involves the infliction of pain that results in emotional and psychological impacts on the child. These impacts are mostly unpleasant and determine the socialization of the child. ...read more.