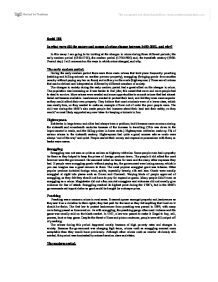 Sophi Hill In what ways did the nature and causes of crime change between 1450-2002, and why? In this essay I am going to be looking at the changes in crime during three different periods; the early modern period (1350-1750), the modern period (1750-1900) and, the twentieth century (1900-Present day.) I will comment on the ways in which crime changed, and why. The early modern period. During the early modern period there were three main crimes that took place frequently: poaching (catching and killing animals on another persons property), smuggling (bringing goods from another country without paying any tax on them) and robbery on the roads (highwaymen.) These are all crimes that can be defined and interpreted as different by different members of society. The changes in society during the early modern period had a great affect on the changes in crime. The population was increasing so it was harder to find jobs; this meant that more and more people had to steal to survive. More crimes were created and some opportunities to commit crimes that had almost faded out became available. Landowners wanted to protect their land, and felt they were more superior as they could afford their own property. They believe that most criminals were of a lower class, which was mostly true, so they wanted to make an example of how out of order the poor people were. ...read more.

Pick pocketing Although people had been picking pockets for centuries, the population increase crowded the streets of London giving criminals an extra chance of success. One of the most common times for someone to pickpocket was during public executions when there would not only be a large number of people, but they would be more likely to concentrate on what was happening to the offender than to what was still in their pockets. A popular item to steal was a handkerchief as it would be easy to take from the person without them noticing. 'Garotting' Garotting was where the criminal would half strangle their victim before attempting to rob them. There was a lot of panic surrounding garrotting as it was seen as a worse form of mugging, another violent crime. Although it was rather horrific, it was also thankfully quite an unusual one. When gas streetlights were introduced, it made garrotting and other street robberies more difficult for the criminals as they were more likely to be seen and caught. Murder When more newspapers were introduced, public interest in murders grew. If a murder were committed in one town or village, the only people who would be aware of it would be the people living in that area. With the introduction of the newspapers, the crimes that happened in the south would be known in the north, east and west, and vice versa. ...read more.

? using computers to steal money from other peoples bank accounts. ? industrial or commercial espionage (spying): breaking into a firm's computer system to discover information for a competitor. ? sabotage: deliberately introducing a 'virus' to make a computer system 'crash' or simply corrupting files, possibly for personal revenge. ? destroying or 'hiding 'information: either to create more work and overtime pay, or in an attempt to avoid tax. Most types of computer crime are very complicated. You would have to be an educated person and know a lot about computers in order to carry out a successful computer crime. It is difficult to convict people, as there is not always sufficient evidence. Police did not at first want to spend a lot of money on detecting computer crimes as it was seen as less important than catching murderers. In 2001 a national high tech crime squad was set up by the government to detect more computer crimes. There are a significant number of students and pupils who have grown up in the generation of technology that attempt to hack into systems and end up committing crimes. Vandalism This ranges from graffiti to destructing, to more serious offences such as obstructing railway lines and motorways with heavy objects than have to be moved. Vandalism causes danger to the public. Over the three different periods, there were many changes to crime. Despite the variations in crime over the centuries, due to changes in politics, society and technology, some crimes e.g. smuggling have remained, as well as some punishments. ...read more.