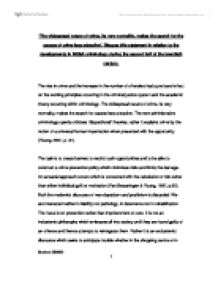 The widespread nature of crime, its very normality, makes the search for the causes of crime less attractive'. Discuss this statement in relation to the developments in British criminology during the second half of the twentieth century.

'The widespread nature of crime, its very normality, makes the search for the causes of crime less attractive'. Discuss this statement in relation to the developments in British criminology during the second half of the twentieth century. The rise in crime and the increase in the number of offenders had a profound effect on the working principles occurring in the criminal justice system and the academic theory occurring within criminology. The widespread nature of crime, its very normality, makes the search for causes less attractive. The new administrative criminology openly criticises 'dispositional' theories, rather it explains crime by the notion of a universal human imperfection when presented with the opportunity (Young, 2001, p. 31). The task is to create barriers to restrict such opportunities and to be able to construct a crime prevention policy which minimises risks and limits the damage. An actuarial approach occurs which is concerned with the calculation of risk rather than either individual guilt or motivation (Van Swaaningen & Young, 1997, p.32). Both the modernist discourse of neo-classicism and positivism is discarded. We are interested neither in liability nor pathology, in deterrence nor in rehabilitation. The focus is on prevention rather than imprisonment or cure. It is not an inclusionist philosophy which embraces all into society until they are found guilty of an offence and thence attempts to reintegrate them. Rather it is an exclusionist discourse which seeks to anticipate trouble whether in the shopping centre or in the prison and to exclude and isolate the deviant. ...read more.

"To a large extent differences in incarceration rates cross-nationally are due to differences in the types and levels of crime across countries." In England and Wales those in prison constitute a significant excluded population in their own right, approaching 81,458 (HM Prison Service, n.d.). The rise in crime generates a whole series of barriers to prevent or manage crime. Thus we have a privatisation of public space in terms of shopping centres, parks and leisure facilities, together with the increasing numbers of gated private residential property. These now commonplace precautions are backed by stronger outside fortification, security patrols and surveillance cameras. (Chambers, 2002, p. 54) The security industry, whose very job is exclusion, becomes one of the major growth occupations. The city, then, becomes one of the barriers, excluding and filtering, although it must be stressed that such barriers are not merely an imposition of the powerful, systems of exclusion, visible and invisible are created both by the wealthy and the dispossessed. Some of the latter can be as discriminatory as that of the powerful (Ruggiero and South, 1997) but much can be seen as defensive exclusion. Crime in Britain has steadily increased, with the exception of small decreases in the mid 50's and 90's, each year since records began in the mid 19th century. Over half of all these offences are for petty offences such as theft and handling stolen goods. ...read more.

It then tests these feelings about criminality and tries to include them in its explanations. Left realism also widens the plane of the debate to the plight and situation of victims and to the informal, community systems of social control. Radical criminologies provide a possible explanation of why positivist criminologies miss hidden crime. They accept the definitions of crime at face value rather than looking at who does the labeling and why certain behaviours are labelled as criminal. It is the act of getting caught which results in the attachment of criminal labels (Muncie & McLaughlin 2004, p. 64). In order to get caught the crime has to be observed or reported, the crimes which are reported are various forms of street crime and robbery. Radicals suggest that those with power are the ones who choose whose label is highlighted, it is more often than not street crime, with other forms of criminals e.g. white collar simply remain unmentioned. It is those who get caught and are labelled who appear in the analysis of positivist theories. Crime statistics are only a small part of the true amount of crime in this country; unfortunately there is no way of recording the amount of unrecorded crime. Victim surveys and self-report studies aim to go somewhere towards redressing the balance, but are flawed due to a low rate of response and therefore they do not account for all violations of the law. In order to get a bigger picture into the state of crime other avenues must be investigated. ...read more.