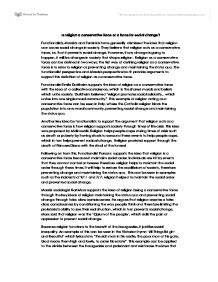 Functionalist Emile Durkheim supports the idea of religion as a conservative force with the idea of a collective conscience, which is the shared morals and beliefs which unite society. Durkheim believed “religion promotes social solidarity... which unites into one single moral community.” This example of religion acting as a conservative force can be seen in Italy, where the Catholic religion binds the population into one moral community, preventing social change and maintaining the status quo.

Another key idea by functionalists to support the argument that religion acts as a conservative force is how religion supports society through times of life crisis. This idea was proposed by Malinowski. Religion helps people cope during times of crisis such as death or puberty by having rituals to surround these events to help people cope, which in turn helps prevent radical change. Religion provided support through the death of Princess Diana with the ritual of the funeral.

Following on from this, Functionalist Parsons supports the idea that religion is a conservative force because it maintains social order. Individuals are hit by events that they cannot control or foresee therefore religion helps to maintain the social order through these times. It will help to restore the equilibrium of society, therefore preventing change and maintaining the status quo. This can be seen in examples such as the incidents of 9/11 and 7/7; religion helped to maintain the social order and prevented social change.

Marxist sociologist Karl Marx supports the idea of religion being a conservative force through the key ideas of religion maintaining the status quo and preventing social change through false class consciousness. He argues that religion creates a false class consciousness by conditioning the way people think and therefore limiting the proletariats ability to see their real situation, which in turn prevents social change. Marx said that religion was the ‘Opium of the people’, which dulls the pain of oppression to prevent social change.

Because religion functions to the benefit of the bourgeoisie, it justifies social inequality. An example of this can be seen in the Victorian hymn ‘All Things Bright and Beautiful’ which lyrics state “the rich man in his castle, the poor man at his gate, God made them high and lowly, to order his estate”. This example can be applied to the divide between the bourgeoisie and proletariat and reinforces the idea that this social inequality is just how society is meant to be – and therefore prevents a revolution, maintaining the status quo.

Because religion gives the prospect of a better life after death, this keeps the proletariat working hard and therefore in turn, Marxists such as Engles believes this contributes to preventing social change and further supports the idea that religion is a conservative force and maintains the status quo. Engles states that “Christianity promises the oppressed classes salvation from bondage and misery in the afterlife”.

The feminist perspective supports this definition of conservative force as they believe that religion maintains patriarchy within society. Most religious organisations are male centred and women are oppressed by this patriarchal control. Abbott and Wallace use quotes from the bible as examples of religion maintaining traditional beliefs and customs, such as “He is the glory of God; but woman is the glory of man”.  This demonstrates the patriarchal influence that feminists believe is being maintained in today’s society.

Feminists further support the argument that religion is a conservative force via the second definition with the example of the Catholic Church and its strict rules on contraception. They believe these traditional beliefs and values are oppressing women and therefore maintaining the status quo within society.

Feminists argue that religion has been used to maintain traditional beliefs and customs in an extreme way when it is linked to fundamentalism. An example of these extreme beliefs can be seen in Afghanistan – where many Muslim women have to undergo female circumcision as part of the traditional values and beliefs. Due to these extreme actions the status quo is maintained.

However, fundamentalist ideas can also cause social change. Grace Davie defined 6 main characteristics of which need to be present for fundamentalism to occur. These include:
1. Rapid social change in society
2. Internal and external threats to the stability of society
3. A new, powerful leader needs to emerge to guide the people
4. A process of reaction
5. The use of sacred text to justify actions
6. New social boundaries for followers

Once in power, the aim is to maintain traditional values and slow down social change. If fundamentalists are successful, they succeed in defending traditional values, but at the same time they change society by reversing innovations that have taken place. Perhaps the most dramatic and recent example of this can be seen in Afghanistan, where the Taliban regime used the Islamic fundamentalism to push out the corrupt influences of the Western world. The women in society felt the main brunt of these changes, by losing many of their rights and freedom.

Religion as a force for social change has been identified by Weber, a social action theorist, that proposed the idea of the ‘spirit of Capitalism’ which supports the idea that religion is a force for social change. Weber believed that due to certain protestant ethics in western Europe, capitalism developed. This was because the society followed a certain set of religious principles (Calvinism) which included pre-destination theory (where your fate is decided pre-birth) which led towards people working hard to change this fate and therefore eventually society started to become capitalist.

Gramsci further backs this up with the key idea of Hegemonic ideology – a set of ideas which are used to challenge the dominant ideology of society. Gramsci believed religion could be an agency of resistance to attack society or the state; in this respect it becomes a potential source of change, rather than maintaining the status quo. This supports the argument that religion can be a force for social change and not a conservative force.

Neo-functionalists Glock and Stark challenge the view that religion is a conservative force because they believe “that on every side it seems that religion threatens social integration as readily as it contributes to it”. An example of this conflict would be in Northern Ireland between the Catholics and Protestants, where social change has occurred due to the conflicting religions.