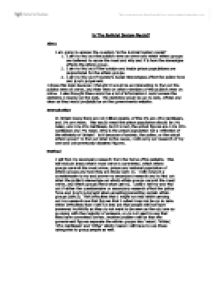 Is the judicial system racist?

Is The Judicial System Racist? Aims I am going to answer the question 'Is the Judicial System Racist' 1. I aim to find out the public's view on crime and which ethnic groups are believed to cause the most and why and if & how the stereotype affects the ethnic group. 2. I aim to find out if the outside and inside prison populations are proportional for the ethnic groups. 3. I aim to find out if Society's Racial Stereotypes affect the police force and jury's judgement. I chose this topic because I thought it would be an interesting to find out the publics view on crime, and their view on other members of the public's view on crime. I also thought there would be a lot of information I could access the statistics I needed on the web. The statistics would be up to date, official and clear as they would probably be on the governments website. Introduction In Britain today there are 55 million people, of this 5% are Afro Caribbean, and 2% are Asian. This would mean the prison population should be 2% Asian, and 5% Afro Caribbean, but it is not, the actual figures are 13% Afro Caribbean and 7% Asian. Why is the prison population not a reflection of the ethnicity of Britain? Is it because of society, the police, or the actual ethnic group? To find out what is the cause, I will carry out research of my own and use previously obtained figures. Method I will find my secondary research from the home office website. This will include areas where most crime is committed, which ethnic groups commit the most crime, prison and national population of ethnic groups and how they are linked (aim 2). I will conduct a questionnaire to try and prove my secondary research and to find out what the public's stereotype on which ethnic groups commit the most crime, and which groups think what (aim1). ...read more.

treated badly due to the stereotype it affects them which could turn them to crime as suggested in aim1, as the media holds a great influence over society, and then the police as a part of society will also brand ethnic groups which plays into aim3. This means that as the main bulk police force is white, they will stop more Afro-Caribbean's and Asians, and this will mean as they are being stopped more, there is more chance they will be arrested and then sent to prison, unbalancing the prison and outside prison populations. They have been arrested because of police stereotypes because they are part of society, linking to aim3, then the jury sends them to prison partly because of the stereotypes also to aim3 but then also unbalances the prison population which could be a reason for aim2. Also it is well known that ethnic minorities tend to do the worst in the British education system. This means they would have the least qualifications, and the least prospects for employment, because of this and stereotyping they will turn to crime. Class also pays a major role in the crime figures, as most criminals are working classes. The working class has a set of very distinct beliefs, values and norms, these are normally, education isn't important, being tough and strong, and that crime is accepted. Also there do not manage to go through the socialization process as well as other classes. The working classes normally have the least numbers of opportunities this means if they are unable to find work they will turn to crime to make ends meet. Class can be measured by occupation so this is how the questionnaire will find out about people's class. Table A Class Type Of Job Upper Higher Management Middle Professionals like teachers Working Unskilled labour, and skilled labour The table above shows how people's class were grouped from the response to what type of job they or their parents do. ...read more.

2. I am to find out if societies view on who commits the most crime reflects the prison population. 3. I aim to find out if Racial Stereotypes affect the police force and jury's judgement. Using my questionnaire I found the answer to aim 1, which was that the public definatly thought that Afro Caribbean people committed the most crime BUT white people committed the most crime, which went against the stereotype. Reasons for that could be that white people may be seen as rich or middle class people therefore wouldn't commit crime. Using my secondary research I definatly found out that the prison population does nowhere NEAR reflect the population of society which is aim 2. There are too many Afro Caribbean and Asian people in prison proportionally to how many there are outside of prison. I used my questionnaire, secondary research, knowledge and other bits and pieces from books etc. to answer aim 3, which is answered below. I believe I explained my beliefs and the facts in a good combination to answer the question 'Is the Judicial System Racist' And if I had to give an answer I would say yes, but it is not so much racism as a combination of other things with stereotypes of society (in my mind) being the biggest part. However what racism that is a rare oddity or more ignorance and the police following stereotypes then hatred. I don't think the Judicial Force holds any 'hate' to any race they just follow the stereotypes of their society and they are that Afro Caribbean's commit the most crime, so they are stopped more often, meaning they are arrested more often. That is why there are more Afro Caribbean's in prison compared to the outside population. They are more likely to be stopped in the street, which means they are more likely to be arrested. This links back to aim 3, as the most direct aim to answer the most bigger question 'Is the Judicial System Racist', which I answered. ...read more.