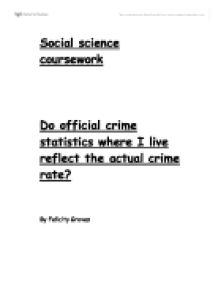 My hypothesis I expect to find that the official crime statistics in my area do not reflect the actual crime rate. I expect this because it is obvious that not all crime is reported to the police. Many people do not report crime

Social science coursework Do official crime statistics where I live reflect the actual crime rate? By Felicity Groves Introduction I chose the title 'Do official crime statistics where I live reflect the actual crime rate?' This is an investigation in which I will have to compare the official crime statistics in my area with crime statistics found by the British crime survey and my own research. I chose this title for many reasons. I think that the gap between official crime statistics and the hidden crime figure is a large one. I believe this is partially the fault of the police and our system. I think that people in society do not feel they can trust or rely on the police enough to report all crimes. Answering my coursework question and revealing reasons for not reporting crime and reasons that police do not record all crime is important in improving the system of dealing with victims and decreasing crime. I find this interesting and compelling. I think it is very important to society to find ways to help change the label of the police and to encourage reported crime. People may feel that they con not report crimes like rape because it is uncomfortable to talk to the police about it. If research showed this then police could be trained to deal with victims in a more caring manner. My hypothesis I expect to find that the official crime statistics in my area do not reflect the actual crime rate. I expect this because it is obvious that not all crime is reported to the police. Many people do not report crime that they feel is too petty and where they cannot gain anything from reporting it (e.g. people may report a stolen car to claim from their insurance.) I think that many would consider most of the crime that goes on in my area to trivial to report to the police (vandalism without much loss etc). ...read more.

I am going to hand out five pilot questionnaires randomly to people I know and I will ask them if there are any problems with my questionnaires if so I will change them. Having handed out five pilot questionnaires the people that have filled them in have all said that there were no problems with my questionnaires and so I will use these to hand out to people in my area. I must choose a way to hand out my questionnaires that is fair and reasonably quick. I must try to have a varied age group and class within the population of my respondents. I have decided to do this by handing out ten questionnaires to different parts of my area, these different parts will have different types of houses varying in value and size, and this should make my results more varied as I will not give my questionnaires to one area with the same types of houses or people living there. I am going to hand out my questionnaires door to door and then ask people to fill them out and then go back and collect them in a week, this will hopefully encourage people to fill them out as they will have to do it on the spot and will have a week in which to do it in. I am also going to try to interview a local police officer about there views on the difference between the actual crime rate and the official crime statistics. I will try and ask the police officer questions that correspond with my questionnaire in order for me to compare results. Interview plan. 1. Is there much failure to report crime in Backwell? 2. Why do you think the main reason for this is? 3. Are there many crimes reported but unrecorded? 4. Do self report studies and victim surveys allow you to calculate more statistics in Backwell? ...read more.

I would not have been able to have opinions of the public. I do not think that this method would have been very accurate as I could not distinguish between reported and unreported crimes in my area. The advantages of doing a victim survey to a self report study or content analysis are that I now have a clear idea of how many crimes in my area go unreported in my area, this may have been hard to do using a content analysis. I also think that a clear advantage of a victim survey over a self report study is that people are more likely to admitting to being a victim of crime than they are to committing a crime. I think that my coursework was slightly biased against the police as many questions involved people giving there opinion on whether they thought the police could do more to increase reported crime, this may have encouraged some people to wright negative comments about the police. In addition, because I did not mange to get an interview with a police officer (despite trying), this meant that the police did not get their chance to express their opinion. If I had interviewed a police officer my conclusion on their involvement in the difference between the actual crime rate and the official statistics might have been different. I believe that my results show very clearly that there is a huge difference between the official crime statistics and the actual crime rate. I think that if shown my results most of society would be very shocked by them. I do think that many people would blame police for this difference, however I am not sure if this blame would be fair. I think that if police read my results they may be encouraged to be more sensitive towards victims of crime in order to get rid of the label that has been created of their attitudes towards victims. However, police may resent the public for their comments. ...read more.