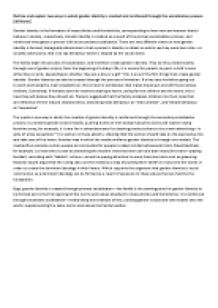 Conversely, if females see their mothers staying at home, caring for the children and the home, this is how they will believe they should act. Parsons suggested that the family socialises children into their roles that are reflective of their natural characteristics, describing male behaviour as ?instrumental?, and female behaviour as ?expressive?. The media is one way in which the creation of gender identity is reinforced through the secondary socialisation process. It promotes gender scripts heavily, pushing stories of men doing masculine duties and women doing feminine ones; for example, it is rare for in advertisements for cleaning products there to be a man advertising?in spite of a few exceptions?it is women in these adverts, showing that the women should take on the expressive role and take care of the home. ...read more.

Marxists would argue that the ruling class use the media as a way of pushing their beliefs in mass onto the world, in order to create the dominant ideology in their favour. Which supports the argument that gender identity is social constructed, as a dominant ideology can be formed as a result of exposure to these values that are held by the bourgeoisie. Ergo, gender identity is created through primary socialisation?the family is the starting point for gender identity to be formed and is the first learning of the norms and values attached to masculinities and femininities. It is reinforced through secondary socialisation?media being one example of this, pushing gender scripts and role models onto the world, supplementing the same norms and values the family teaches. ...read more.