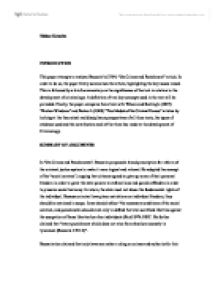 This paper attempts to analyse Bacceria's (1764) &quot;On Crimes and Punishment&quot; article. In order to do so, the paper firstly summarises the article, highlighting the key issues raised. This is followed by a brief commentary

Nishen Kotecha INTRODUCTION This paper attempts to analyse Bacceria's (1764) "On Crimes and Punishment" article. In order to do so, the paper firstly summarises the article, highlighting the key issues raised. This is followed by a brief commentary on the significance of the text in relation to the development of criminology. A definition of two key concepts used in the text will be provided. Finally, the paper compares the article with Wilson and Keeling's (1997) "Broken Windows" and Packer's (1969) "Two Models of the Criminal Process" articles by looking at the theoretical and disciplinary perspectives of all three texts, the types of evidence used and the contribution each of the three has made to the development of Criminology. SUMMARY OF ARGUMENTS In "On Crimes and Punishments", Beccaria proposed a broad prescription for reform of the criminal justice system to make it more logical and rational. He adopted the concept of the "social contract", arguing that citizens agreed to give up some of their personal freedom in order to grant the state powers to enforce laws and punish offenders in order to preserve social harmony. In return, the state must not abuse the fundamental rights of the individual. Because criminal laws place restrictions on individual freedom, they should be restricted in scope. Laws should reflect "the necessary conditions of the social contract, and punishments should exist only to defend the total sacrificed liberties against the usurpation of those liberties by other individuals (Reid 1976:109)". He further claimed that "every punishment which does not arise from absolute necessity is tyrannical (Beccaria 1764:2)". Beccaria also claimed that only laws can make a ruling on crimes and authority for this can reside only with the legislators and not with the judiciary. Judges cannot have the authority to interpret laws. Instead, they should apply syllogism. "The major should be the general law; the minor, the conformity of the action, or its opposition to the laws; the conclusion, liberty, or punishment (Beccaria 1764:3)". ...read more.

This was attractive to legal authorities because it was based on the social contract theory which supports the uniform enforcement of laws without questioning whether these laws were fair or just. However, Beirne and Messerschmidt (1994) argue that Beccaria's book actually constituted a fundamental break from the concepts of free will and that his intent was to move to a deterministic stance. They claim that Beccaria's arguments, that human behaviour was predictable and controllable, and that public, prompt, minimal and appropriate punishments would result in lower rates of crime, were highly deterministic ones, against the theological assertions about human free will. They further claim that although Beccaria focused on the causal impact of criminal justice policies on criminal behaviour, he also pointed to the factors in larger societies that also had a causal impact on crime, such as education, poverty and economic inequality, but he had done that carefully as he feared retribution. According to Hazlehurst (1996), even more important for the book's acceptance was the fact that the American Revolution of 1776 and the French Revolution of 1789 occurred soon after its publication. Both revolutions were guided by ideas of Naturalism and of the social contract whereas Beccaria's ideas were the basis for the French Code of 1791 and their new criminal justice system. From America and France, Beccaria's ideas spread to the rest of the industrialised world. Beccaria's ideas were adopted and further developed by neo-classicists, positivists and modern agencies of social control (Vold et al 1998, Hazlehurst 1996, Taylor, Walton and Young 1973). Neoclassicists provided the modifications necessary for the administration of the criminal law based on classical theory that resulted from practical experience (Vold et al 1998). Later transition form classical theories to positivist theories marked a continuing development in the direction to which Beccaria pointed. It has been further claimed that Beccaria's view is now "the major model of human behaviour held to by agencies of social control in all advanced industrial societies" (Taylor, Walton and Young 1973:9-10). ...read more.

On the other hand, due process model accepts the possibility of error and attempts to prevent and eliminate mistakes. Packer further claimed that a person is not to be held guilty for a crime by merely showing that in all probability, based upon reliable evidence, he did factually what he is said to have done. Instead, he is to be held guilty if and only if these factual determinations are made in procedurally regular fashion and by authorities acting within competences duly allocated to them. He adds that many requirements such as jurisdiction, venue, statute of limitations, double jeopardy and criminal responsibility have nothing to do with the factual question of whether the person did or did not engage in the conduct that is he/she is being charged for. Packer had also stressed the issue of equality. He claims that the relative financial inability of most persons accused of crime results in treatment very different from that accorded to the small minority of the financially capable. For this reason, its impact has already been substantial and may be expected to be even more so in the future. Finally, Packer argues that there is a wide-spread skepticism about the morality and utility of the criminal sanctions. CONCLUSION The paper has provided a summary of Bacceria's (1764) "On Crimes and Punishment" article. The paper has also provided a brief commentary on the significance of the text in relation to the development of criminology, analysing issues of its contribution to foundations of classical criminology, challenges to and removal of spiritualism, criticism of extensive and cruel punishment and inequality in society, possible fundamental break with the concept of free will and move to a deterministic stance, its contribution to the French and American Revolutions, and its contribution to neo-classicism, positivism and modern agencies of social control. Finally, the paper has compared Beccaria's ideas with those of Wilson and Keeling (1982) and Packer's (1969), in terms of theoretical and disciplinary perspectives employed. ...read more.