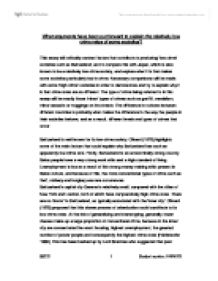 What arguments have been put forward to explain the relatively low crime rates of some societies?

What arguments have been put forward to explain the relatively low crime rates of some societies? This essay will critically contrast factors that contribute to producing 'low crime' societies such as Switzerland, and to compare this with Japan, which is also known to be a relatively low crime society, and explore what it is that makes some societies particularly low in crime. Necessary comparisons will be made with some 'high crime' societies in order to demonstrate and try to explain why it is that crime rates are so different. The type of crime being referred to in this essay will be mostly those 'minor' types of crimes such as graffiti, vandalism, minor assaults or muggings on the streets. The difference in cultures between different countries is probably what makes the difference in the way the people in their societies behave, and as a result, different levels and types of crimes that occur. Switzerland is well known for its low crime society. Clinard (1978) highlights some of the main factors that could explain why Switzerland has such an apparently low crime rate. Firstly, Switzerland is an economically strong country. Swiss people have a very strong work ethic and a high standard of living. Unemployment is low as a result of this strong money making ethic present in Swiss culture, and because of this, the more conventional types of crime such as theft, robbery and burglary are rare occurrences. ...read more.

This is where the theory of 'zero tolerance' stems from, which is adopted in cities such as New York, and increasingly around the UK (Croall 1998). On the other hand, 'problem orientated' policing is where the police use a variety of tactics to achieve their objectives, such as working with the local community and agencies, seeking the underlying causes of problems and trying to solve them for the longer term, rather than dealing with symptoms for a quick short term fix, as implied with a zero tolerance ethic (Dennis et al 1997). This is the style of policing most similar to that adopted by the Swiss police, therefore it could be suggested that Switzerland's low crime society could be because of this style of policing, and the way people are dealt with in the Criminal Justice system, as it is a very different method to those used in 'high crime' societies, which generally tend to adopt the zero tolerance approach. The Swiss are known to be more tolerant of certain crimes and there are always different ways of interpreting crime statistics, even with the best intentions (Clinard 1978). Because crime has not been seen as a major problem in Switzerland, there has been very little scrutiny of Swiss crime trends. This could have had a major affect on the general perception of crime in Switzerland. One explanation is that crime is actually lower than in other countries, and that Swiss society is more conformist and less inclined to criminal behaviour. ...read more.

Respect and confidence in the police will be lost, and there will be no way that the 'community' style of policing will be able to control crime, if the police cannot control it. Alternatives to this heavy handed approach of zero tolerance need to be found in order to prevent crime, particularly youth crime, from getting out of control. Perhaps these methods can be found in the case of Switzerland, where a more tolerant approach seems to be working. However, much more thought needs to go into a suitable crime control method to help so-called 'high crime' societies, because Japan is also low crime, but it is more oppressive than Swiss culture. Some young Japanese people have committed horrific crimes because they were ashamed about something that we in the West would see as a trivial issue. One example is a young boy who killed his mother because she would have disapproved of an argument he has had with fellow pupils earlier that day (Balasegaram 2001). This 'shame' method of keeping young people in-line seems to work until the pressure becomes too much for Japanese youth, as discussed before, they are sometimes crushed under the pressure. A balance needs to be found between these (perhaps) overly repressive cultures and other cultures, which allow young people too much freedom to do as they wish. However, it does seem that the reason both these countries have such low crime rates is because of the strict values and norms applied by family and peers alike. ...read more.