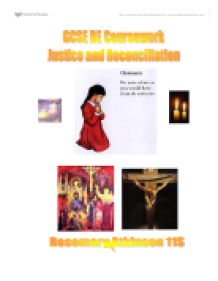 What Christians believe about justice and forgiveness

Rosie Atkinson 11S GCSE COURSEWORK - R.E JUSTICE AND RECONCILIATION AO1: What Christians believe about justice and forgiveness Christians strongly believe in human rights and the importance of justice for both the victim and the criminal. The UN Declaration of Human Rights covers the wider definition of justice and states that "everyone is entitled to a social and international order in which the rights and freedoms set forth" can be fully realized. The exercising of rights and freedoms is interpreted in different ways by different people. Therefore the instalment of "limitations by law. Solely for the purpose of securing due recognition" and respect for others freedom and meeting the just requirements in a democratic society, specifically shows the obvious boundaries between right and wrong. A Christian is defined as a follower of Christ; therefore we follow the work and teaching of Christ. He took the burden of pain and suffering for mankind and was directly caught up in system of corruption and injustice. His trial at the High Priest's House (Mark Ch. 14) showed that human beings can be blinded by fear or power to protect themselves of duties. Both on the night of the trial and the day of the crucifixion Jesus was wronged and unjustly condemned to death through the High Priest and Pontius Pilate. Christian beliefs in today's world highlight the fact that justice should restore both the criminal and the victim. Christians support a criminal justice system that is not based on revenge, but on reform and deterrence. They agree that if somebody does something wrong, they should receive a punishment that is fitting for the crime they have committed. ...read more.

A crime is an action considered to be wrong and punishable by law. A sin is an act of disobedience that goes against the will of God. People do wrong for a variety of reasons. Some people will commit small crimes and if not caught and punished, the gains become habit forming. Reasons for committing such crimes may include social pressures, circumstances, personal problems or greed. Most Churches and Christians agree that an assessment of the causes of crime are crucial, as well as the decision of how to deal with existing crime. Christians are encouraged to follow Jesus' view of crime and concentrate on a person's inward honesty and morality rather than outward behaviour, be they good or bad. This is depicted in the parable of the Pharisee and the Tax collector (Luke 18:9-14). Jesus taught that abiding by the law is important but it was what the person was like inside that mattered more. Jesus also showed his teachings by example for when he was dying on the cross he asked God to forgive his murderers- "Forgive them Father! They don't know what they are doing"- (Luke 23:24) Murder is a very difficult crime on which to decide standard punishment. Some Christians believe that manslaughter is arguably a form of murder since the criminal must have been committing a less severe crime like driving over the designated speed limit if they killed an innocent pedestrian. Also if more than one person committed a planned murder, it is often found that although one of the people may not have actually performed the killing, they were still involved with the plot. ...read more.

A recent victim of injustice in today's prison system is Sally Clark, whose two babies both died of cot deaths. The system not only did not review all the possible evidence to the full, in many cases the prisoner is not even given the basic human dignity in the duration of prison life. A Christian response to punishment and crime is love and compassion. Locking up criminals to keep them off the street and for society to feel safe, is not the answer to reformation. To punish and hide from society is damaging the criminal further. Taking a general view of the prison system, it is a place for rehabilitation and for release back into the community so that prisoners should lead a normal life again. In a truly Christian society, no one should be subject to losing all freedom in prison. The debate really comes down to the assessment on each crime for its merits and the mental health of the prisoner. Christians should look beyond the crime to the person inside. In many cases prisoners are child-like, vulnerable and frightened. If a child was locked in a cupboard for wrong doings it would be classed as child abuse. This will often damage them further, but the strategy of alternative suggestions offers a fresh activity to centre on. Prison is all very well, but in a Christian society prisoners should receive the support and care they need, and deterrence from crime by providing alternatives that should not include banishment to a dark and damp prison cell for days. Criminals have beliefs and faith too, it is a matter of unlocking these emotions and teaching the criminal to express these feelings and creativity through giving back something to the community. Words: 385 ...read more.