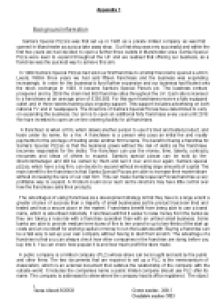 ï»¿Appendix 1 Background information Samia’s Special Pizza’s was first set up in 1985 as a private limited company as was first opened in Manchester as a pizza take away shop. Our first shop was very successful and within the first two years we had decided to open a further three outlets in Manchester area. Samia Special Pizza were keen to expand throughout the UK and we realised that offering our business, as a franchise was the quickest way to achieve this aim. In 1989 Samia’s Special Pizzas had sold our first franchise to a family friend who opened a unit in Leeds. Within three years we had sold fifteen franchises and the business was expanding increasingly. In order for the business to fund further expansion and our business had floated onto the stock exchange in 1993. It became Samia’s Special Pizza’s plc. The business venture prospered and by 2009 the chain had 600 franchise sites throughout the UK. Each site is licensed to a franchisee at an average price of £250,000. For this sum franchisees receive a fully equipped outlet and in three weeks training plus ongoing support. This support includes advertising on both national TV and in newspapers. The Directors of Samia’s Special Pizzas have determined to carry on expanding the business. Our aim is to open an additional forty franchises every year until 2018. We have invested to open an on-line ordering facility for all franchises. ...read more.

The shares are usually sold easily and have a minimum share capital of £50,000 and that large organisations have a high status and a good credit rating. Disadvantages include that the founders or the original owners may lose control over decisions or have little influence over the decisions made therefore shareholder appoint directors/managers. As each shareholder has a very little say in how the company is run unless they own an awful lot of share. Also the interests of shareholders and managers can differ, the AGM and the annual report help to keep everyone informed and involved. If Samia’s Special Pizzas becomes a public limited company its will be easy for someone to buy enough shares to take over the company if they can convince the shareholder to sell the business. The PLC can have a large number of shareholders and their needs to be a general agreement on the company objectives. This would make it difficult for Samia’s Special Pizzas to sacrifice profit to other objectives like helping the environment. Other disadvantages include that if Samia’s Special Pizzas were to become a PLC due to anyone being able to purchase share in the company, there is a slight chance of the company being joined to another company (merger) or even being taken over as stated above. Also if the company was to become very successful and expand so much there is possibility that there is no longer a good relationship between the owners/ managers and the employees. ...read more.

new so the prices of the products will start of cheap to attract new people then once the business gets popular and up and running the business can then start to make our products more expensive. Special promotional methods will help the business become more popular and help attract more customers with a range of suitable methods of pricing. Finally my fifth aim is to make a recommendation or an overall conclusion to how and what good strategies they will use to open a pizza franchise business successfully. We intend to expand abroad and we have decided to open our first pizza shop America. The directors of our business Samia?s special pizzas are very keen to diversify and are considering opening a number of sandwich bars in London. Strada Pizza Express Pizza Hut Luciano?s Pizza Pino?s pizza Dominoes pizza Perfect pizza The example above is of a market map it shows which and us which of the pizzas are the most popular and which of the pizzas businesses is the cheapest. From the chart we can analyses that if we look at Dominoes pizza it is a vary popular place and that it is near the cheaper side then we can see the Strada it is still equally popular but it more expensive this shows that some people prefer to have top quality food and it can still be equally popular as the cheaper businesses. Cheaper Highly popular Less Popular Expensive Samia Ahmed SCGSG Centre number- 20315 Candidate number-5003 ...read more.