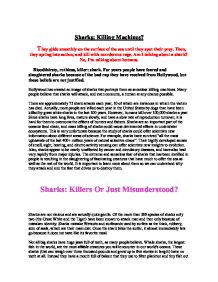 Sharks: Killing Machines? They glide smoothly on the surface of the sea until they spot their prey. Then, they spring into action, and kill with murderous rage. Am I talking about a shark? No, I'm talking about humans. Bloodthirsty, ruthless, killer: shark. For years people have feared and slaughtered sharks because of the bad rap they have received from Hollywood, but these beliefs are not justified. Hollywood has created an image of sharks that portrays them as senseless killing machines. Many people believe that sharks will attack, and even consume, a human at any chance possible. There are approximately 75 shark attacks each year, 10 of which are instances in which the victim has died. Actually, more people are killed each year in the United States by dogs than have been killed by great white sharks in the last 100 years. ...read more.

It is important to learn more about them so we can understand why they attack and end the fear that drives us to destroy them. Sharks: Killers Or Just Misunderstood? Sharks are not vicious and are actually quite gentle. Of the more than 388 species of sharks only two (the Great White and the Tiger) have been known to attack man and then only because of mistaken identity. Sharks mistake Wetsuits and surfboards used by surfers as the thick, rubbery, skin of seals, which are their main diet. Once the shark bites the surfer, it almost immediately lets go because it does not taste like its favorite meal. Not all big sharks have huge jaws full of teeth, as many people believe. Whale sharks, the largest fish in the world, are the most affable creatures you will encounter in our world's oceans. ...read more.

Sharks are also killed for sport. More and more people are catching and releasing sharks, which is better than just killing them, but there are still problems. Many fishermen use the process of gaffing (which is like spearing), which can easily be fatal. Many of the sharks are not released alive. Another problem is that since it takes sharks 15 years to mature sexually, most sharks caught are killed before they get a chance to reproduce. This decreases the shark population, especially that of the Great White. It is extremely important to protect the Great White, as well as other sharks. They help to control the population of predators dangerous to humans. Also, they are important when it comes to medical research because they heal quickly and are resistant to most diseases. A shark's cornea can be extracted and transplanted into humans, but if no sharks are left, then research will screech to a halt. ...read more.