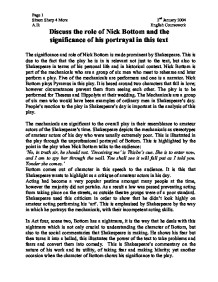 Discuss the role of Nick Bottom and the significance of his portrayal in this text The significance and role of Nick Bottom is made prominent by Shakespeare. This is due to the fact that the play he is in is relevant not just to the text, but also to Shakespeare in terms of his personal life and in historical context. Nick Bottom is part of the mechanicals who are a group of six men who meet to rehearse and later perform a play. Five of the mechanicals are performers and one is a narrator. Nick Bottom plays Pyramus in this play. It is based around two characters that fall in love; however circumstances prevent them from seeing each other. The play is to be performed for Theseus and Hippolyta at their wedding. The Mechanicals are a group of six men who would have been examples of ordinary men in Shakespeare's day. People's reaction to the play in Shakespeare's day is important in the analysis of this play. The mechanicals are significant to the overall play in their resemblance to amateur actors of the Shakespeare's time. Shakespeare depicts the mechanicals as stereotypes of amateur actors of his day who were usually extremely poor. This is illustrated in the play through the unprofessional portrayal of Bottom. ...read more.

Shakespeare brings comedy into the play through the actor's abysmal performance. This makes light of a play which was at face value meant to be serious. The play that the mechanicals perform therefore is a symbol of 'A Midsummer Night's Dream' as the characters in each of the plays go through the same type of problems with love. Shakespeare is trying to get people to see his view on the way that love encompasses so many problems; through these parallelisms. He seeks to deliver this message to the audience through the lovers' part of the play, but also in the form of the Mechanicals play. The reason that Shakespeare brings the element of comedy into the play, is mainly because, in his time there would have been many uneducated people watching the play when it was performed live and at their own level. Comedy is a powerful vehicle that people of all backgrounds could enjoy, and relate to. Shakespeare brings this into the play so that all of the audience will enjoy it. The well-educated could enjoy the more intellectual and serious parts of the play, and the less-educated could enjoy the joyful and comedic content. Nick Bottom is significant not only as an individual of the mechanicals but also to the overall performance, moreover he links all three worlds together; these worlds being that of reality; the world in which the mechanicals play is set and the realm of the fairies. ...read more.

Bottom proclaims the play to be "a very good piece of work" even though he has barely enough knowledge of the play to recognise Pyramus, one of the title characters. This example is an excellent illustrator of Bottom's character, he is full of good advice and intentions but has no idea of the way in which to deliver it. This scene demonstrates the mechanicals slim chance of putting on a good play as well as the talent of Bottom to always complicate situations. In discussing the role of Nick Bottom and the significance he has in the mechanicals play, sufficient reasoning has been relayed in order to backup my opening sentence; the significance and role of Nick Bottom is made prominent by Shakespeare. With particular reference to that of Nick Bottom, this study has covered the mechanicals as well as dealing with parallels and links between the three worlds Shakespeare has woven. The analysis covered in this essay has outlined the major themes and issues connected with Nick Bottom as part of the mechanicals. Therefore based on all evidence and analysis portrayed in this essay, it is reasonable to conclude that the role of Nick Bottom and the significance of his portrayal in this text is truly an important one. Word Count = 1372 ?? ?? ?? ?? Page 1 Simon Sharp 4 More 2nd January 2004 A.D. English Coursework ...read more.