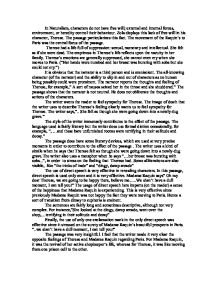 In Naturalism, characters do not have free will; external and internal forces, environment, or heredity control their behaviour.

In Naturalism, characters do not have free will; external and internal forces, environment, or heredity control their behaviour. Zola displays this lack of free will in his character, Therese. The passage particularizes this fact. The movement of the Raquin's to Paris was the central focus of the passage. Therese had a life full of suppression: sexual, monetary and intellectual. She felt as if she were dead. The emptiness in Therese's life reflects upon the vacuity in her family. Therese's emotions are generally suppressed, she cannot even cry when she moves to Paris. ("Her hands were numbed and her breast was bursting with sobs but she could not cry.") It is obvious that the narrator is a third person and is omniscient. ...read more.

This is very effective since previously Madame Raquin was not happy the fact they were moving to Paris. Hence a sort of transition from dimay to euphoria is eminent. The sentences are fairly long and sometimes descriptive, although not very complex. For instance,"She looked at the dingy, damp arcade, went over the shop,...terrifying in their solitude and decay" Finally, the use of only one exclamation mark in the only direct speech was effective since it stressed on the surety of Madame Raquin's beautiful prospects in Paris. "..we shan't have a dull moment, I can tell you!" The passage was very insightful. I feel that the writer made it very clear the opposite feelings of Therese and Madame Raquin regarding Paris. For Madame Raquin, it was the revival of her active shopkeeper's life, whereas for Therese, it was like moving from one prison cell to the other. ...read more.