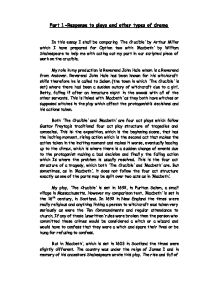 Part 1-Response to plays and other types of drama In this essay I shall be comparing 'The Crucible' by Arthur Miller which I have prepared for Option two with 'Macbeth' by William Shakespeare to help me with acting out my part in our scripted piece of work on the crucible. My role in my production is Reverend John Hale whom is a Reverend from Andover. Reverend John Hale has been known for his witchcraft skills therefore he is called to Salem (the town in which 'The Crucible' is set) where there had been a sudden outcry of witchcraft due to a girl, Betty, falling ill after an immature night in the woods with all of the other servants. This is linked with 'Macbeth' as they both have witches or supposed witches in the play which affect the protagonist's decisions and his actions taken. ...read more.

My play, 'The Crucible' is set in 1692, in Puritan Salem, a small village in Massachusetts. However my comparison text, 'Macbeth' is set in the 16th century, in Scotland. In 1692 in New England the times were really religious and anything linking a person to witchcraft was taken very seriously as were the Ten Commandments and regular attendance to church. If any of these 'unwritten' rules were broken then the person who committed these crimes would be considered a witch or a wizard and would have to confess that they were a witch and spare their lives or be hung for refusing to confess. But in 'Macbeth', which is set in 1603 in Scotland the times were slightly different. The country was under the reign of James I and in memory of his ancestors Shakespeare wrote this play. ...read more.

They wore traditional clothing which was plain as they were very religious, the men wore trousers and an open necked shirt or cloaks and ponchos. So we wore similar clothing to this and our props also represented the time in which our play was set as did the staging and set design. This clothing was very similar to that of 'Macbeth'. In conclusion, I have enjoyed performing The Crucible even though my acting was at its weakest. It was a different experience as beforehand we had performed modern day drama therefore it was a challenge as well as a privilege to be able to perform this historical piece. I have learnt by performing this that to really do well you need to do three major things: understand your character (their background, who they are etc), know your lines and most importantly understand your lines so If you forget your line at least you should know around about what topic you need to be talking about. ...read more.