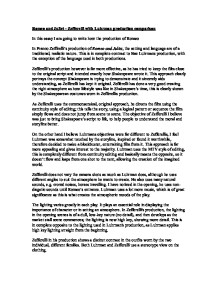 Romeo and Juliet - Zefferelli with Luhrman production comparison In this essay I am going to write how the production of Romeo In Franco Zeffirelli's production of Romeo and Juliet, the setting and language are of a traditional, realistic nature. This is in complete contrast to Baz Luhrmans production, with the exception of the language used in both productions. Zefferelli's production however is far more effective, as he has tried to keep the film close to the original script and intended exactly how Shakespeare wrote it. This approach clearly portrays the concept Shakespeare is trying to demonstrate and it sincerely aids understanding, as Zefferelli has kept it original. Zefferelli has done a very good creating the right atmosphere as how lifestyle was like in Shakespeare's time, this is clearly shown by the Shakespearean costumes worn in Zefferellis production. As Zefferelli uses the commonsensical, original approach, he directs the film using the continuity style of editing; this tells the story, using a logical pattern or sequence the film simply flows and does not jump from scene to scene. ...read more.

Zefferelli in his production shows a distinct contrast in the outfits worn by the two individual, different families. Both Luhrman and Zefferelli use a stereotype view on the clothing. The use of sets in the film makes it far more effective and realistic. Zefferelli uses all the old-fashion original props, such as swords etc. Luhrman replaces these swords applying the modern approach to killing, using guns. In Zefferellis, production music is not of great significance and not relied upon to create atmosphere. When there is dialogue, there is no music; music is only present when there is action. In Zefferelli's production, the opening scene starts at the market place, where's there is high key lighting, there are various consistent mid-shots emphasizing the Capulet boys and Montague boys (the lighting supports the realistic detail). A fight breaks out, involving everyone, there's increasing tension, the camera jumps from one individual to another, sudden screaming, shouting, crying, whole scenario of jumpy, loud tension, then a stop! ...read more.

The audience is also an important consideration. Zefferelli's production would be more aimed at the Elizabethan audience, who were in some ways a lot more sophisticated than the audiences of the twentieth century were. For example, when we go to see a new film or play, we expect to find the novelty in the action. Some of the situations may be familiar; we may be able to anticipate the ending; and the characters (who should not really be different from everyday people we meet). Having said this most people today like to see a new story, a new moral. This is a demand that every director tries to fulfil. Shakespeare's audience had different expectations, they were happy to be given stories they recognised. A final note, I believe Zefferellis production is successful in the way that it presents the play very accurately and aids understanding and gives, one historic knowledge of the period. Nevertheless, Luhrman's production is far more thrilling and great to watch, having said this; it also follows the story well. The film is very entertaining to watch and vastly appeals to the modern generation. ...read more.