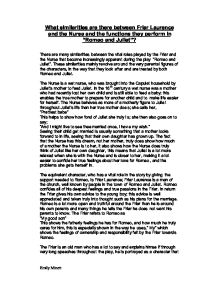 What similarities are there between Friar Laurence and the Nurse and the functions they perform in Romeo and Juliet?

What similarities are there between Friar Laurence and the Nurse and the functions they perform in "Romeo and Juliet"? There are many similarities between the vital roles played by the Friar and the Nurse that become increasingly apparent during the play "Romeo and Juliet". These similarities mainly revolve around the very parental figures of the characters, in the way that they look after and are treated by both Romeo and Juliet. The Nurse is a wet nurse, who was brought into the Capulet household by Juliet's mother to feed Juliet. In the 16th century a wet nurse was a mother who had recently lost her own child and is still able to feed a baby; this enables the true mother to prepare for another child and to make life easier for herself. The Nurse behaves as more of a motherly figure to Juliet throughout Juliet's life than her true mother does; she calls her, "Prettiest babe" This helps to show how fond of Juliet she truly is; she then also goes on to say; "And I might live to see thee married once, I have my wish." Seeing their child get married is usually something that a mother looks forward to in life, seeing that their own daughter has grown up. ...read more.

Unfortunately many of his plans go very wrong, such as when the Friar gives Juliet a potion to make her appear dead, but the letter does not reach Romeo, this changes the once small problem and cause it to become greater and if not impossible a lot harder to fix. Even though the Friar likes to help people and do the best he can, one of his many plans is the reason for the tragic ending of the play leaving both Romeo and Juliet dead. One of the main similarities between both the Friar and the Nurse is that they both keep the secret of the marriage between Romeo and Juliet quiet from their parents. It is this secret that fuels most of the rest of the play. This secret causes great problems for Juliet including the dilemma of her parents wanting her to marry the county Paris, unaware that she is already married to Romeo. Both the Nurse and the Friar demonstrate that they care greatly for the lovers and openly show that they would be willing do almost anything to help then and make them happy. You would normally expect this only from family and closest friends, not from people employed by the family and local church men. ...read more.

where as if the Friar is asked, he will put a fight first, pointing out his own feelings towards what he is being asked, before physically doing it, he also thinks of solutions to problems when faced with them, even though theses solutions do not always work. Whereas the Nurse did nothing to solve any problems, she did not try to come up with a solution, he answer was to just forget it; the Nurse mainly just did what she was told. Other than the Friar's tendency to fight back, the Friar and Nurse are very similar in character, they play the same role, and perform a very similar function, but they are on different sides of the story, the Nurse on the Capulet side, and the Friar as more of a central character, where both Romeo and Juliet can go to him. They both advise and help the "star-crossed lovers" to do what they want against their own parents' wishes. Though I am sure they are both forced to regret this at the end of the script, where the decisions they made about keeping quiet and trying to help the ones they love and care about, end up with both dead, and themselves partially to blame. ?? ?? ?? ?? Emily Minett ...read more.