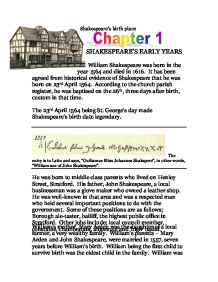 Shakespeare's birth place SHAKESPEARE'S EARLY YEARS William Shakespeare was born in the year 1564 and died in 1616. It has been agreed from historical evidence of Shakespeare that he was born on 23rd April 1564. According to the church parish register, he was baptised on the 26th, three days after birth, custom in that time. The 23rd April 1564 being St. George's day made Shakespeare's birth date legendary. The entry is in Latin and says, "Guiliamus filius Johannes Shakspere", in other words, "William son of John Shakespeare". He was born to middle class parents who lived on Henley Street, Stratford. His father, John Shakespeare, a local businessman was a glove maker who owned a leather shop. He was well-known in that area and was a respected man who held several important positions to do with the government. Some of these positions are as follows; Borough ale-taster, bailiff, the highest public office in Stratford. Other jobs include; local council member, constable, chamberlain, alderman and 'high' bailiff. ...read more.

Shakespeare's poems show his love of nature and rural life which stood out in his earlier childhood. In the year 1577, John Shakespeare suffered from financial loss; the outcome of this meant that he was made redundant of several governmental positional mentioned earlier on in the text. Later on, he lost his aldermanic seat and in 1592 he was one of whom had been accused of not attending church 'for feare of process for debtte.' However his life improved from 1596 when he applied for and was given, a coat of arms, which would raise them into the 'important' class of people. In the future William being shareholder in the Lord Chamberlain's Men (his company of actors) allowed him to restore his father's fortunes. There is not much information on William between the times when he left Stratford and his appearance in London as an actor and a poet. These times were called the lost years. The Globe Theatre in London was where most of William Shakespeare's plays were first shown. ...read more.

Tiered galleries around the open area accommodated the wealthier people who could afford seats, and those of the lower classes - 'the groundlings'. They stood around the stage during the performance of a play. The space under and behind the stage was used for special effects, storage and costume changes. The entire structure of the Globe was not very big compared to modern day standards although it is thought to hold fairly large crowds. As many as 2000 people could fit inside. The Globe is said to have been shaped like a cylinder with a thatched gallery roof which was made out of straw. The roof had to be coated with fire-protectant in case of fire. Funnily enough, in 1613, the roof was accidentally set on fire by a cannon firing during a performance of Henry VIII. The entire theatre burned down in about an hour, (obviously the fire protectant didn't do a very good job!). The Globe was re-built a year later in 1614 but with a tilted gallery roof and more circular in shape. In 1644, 30 years after in was re-built, the Globe was demolished by the Puritans. A brewery now stands in its place. ...read more.